Mumbai Indians restricted Rajasthan Royals to keep their hopes of qualifying for the qualifier alive. Batting first Mumbai Indians put a mammoth score of 187 run on the board and it was a challenging total to chase for the Royals. 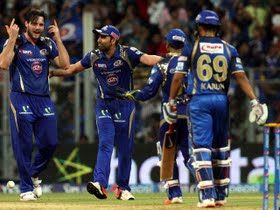 Chasing the score of 188, Rajasthan Royals didn’t began their inning well as their openers never looked in good touch and tried to hit the ball too hard. Though Suchith dropped Ajinkya Rahane early in his inning but he was not able to make the most of the chance he got and soon after that he was caught by Ambati Rayudu in covers. Shane Watson and Sanju Samson anchored the ship and played sensibly before Watson was bowled off Suchith when he was trying to cut the ball which was not that short. The stand of 56 runs between Samson and Smith brought Royals back into the game. Samson played the inning of his life and he scored so freely. His six and a four off Lasith Malinga on consecutive deliveries was one of the highlights of the day. Smith got out between the run of play and it opened the game of the Mumbai. McClenaghan was the standout performer with the ball for the Mumbai and he gave break through to the team when they needed the most. McClenaghan got rid of Smith first and then Samson and Karun Nair in the same over. Once Samson got out, the match was literally over for the Royals.

Winning the toss Rajasthan Royals skipper Shane Watson won the toss and decided to bowl first. Mumbai openers started off well. Parthiv Patel put all the bad delivery away and quickly reached on 23. Patel along with Lendl Simmons played good hands together. Mumbai lost their way in the middle little when they lost three wickets quickly. Rohit Sharma did played a good hand but failed to accelerate the run scoring and got out at crucial moment. But it was Ambati Rayudu who stole the show today. His 27 ball 53 gave the Mumbai Indians the finishing touch they needed. Rayudu along with Pollard scored 61 runs in the last four overs and it turned the momentum towards Mumbai Indians.

After winning their first five games in start of the tournament, Rajasthan Royals have not won any game from the five games they have played after that. Despite losing this match, Rajasthan Royals are well placed on the second spot while Mumbai Indians are on the seventh spot of the points table.