As Australia look back at things that went wrong for them in Ashes 2015, here's our report card of the Aussie team.

As Australia look back at things that went wrong for them in Ashes 2015, here's our report card of the Aussie team.

Chris Rogers (8/10): Although Australia lost the Ashes, Rogers should be proud of the way he performed in his farewell series. Right from the start, Rogers was one Aussie who looked at ease in the conditions. He began with a fantastic knock at Cardiff, and bettered it with a hundred at Lord's. He remained consistent throughout the series, and gave the team good starts. If anything, he would have liked to have finished with more centuries instead of the fifties.

Steven Smith (7/10): Smith ended up as the leading run-scorer in the series. While that is an impressive stat, it doesn't tell the entire story. Smith shone at Lord's and again in the dead rubber at The Oval, notching up impressive hundreds. But, in the three Tests that Australia lost, he was below par. A mixed series it was for Smith. 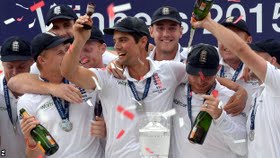 Nathan Lyon (7/10): The Aussie spinner had a mixed series as well. But, given the conditions, and the bowler's limitations, Lyon did a credibly good job. If Australia were told at the start of the series that Lyon would claim 16 wickets at a reasonable rate, they would have gladly taken that. Job well done by Lyon then.

Peter Siddle (7/10): The medium pace bowler was ignored till the very last Test as the Aussies preferred faster men. But, with all options exhausted, they turned back to the experienced Siddle. And he delivered with six wickets at The Oval while keeping things extremely tight. Siddle played the major role in Australia's consolation win. And, although the series was lost by then, Siddle, on a personal level, revived his career.

He was amongst Australia's most consistent batsmen in the series, but did not get a single hundred. That pretty much sums by Warner's series. He and Rogers gave the team some impressive starts, but Warner did not come up with a match-winning or match-defining innings. The 85 at Oval came a bit too late, indicating that he is still work in progress.

The left-arm pacer had a poor series by his standards. If you take away the Lord's effort, he had precious little to show. The conditions on offer were also not in his favour, as a result of which his effectiveness was significantly reduced.

After the high of the World Cup triumph, this was a low for Starc. He bowled some probing spells, but his consistency was disappointing and, too often, he let the pressure relieve on the opponents. Starc can certainly improve.

Peter Nevill (4/10): Brought in as a replacement for Brad Haddin, Nevill did reasonably well under the circumstances. He kept decently, and played a couple of defiant knocks. These are still early days though, and he needs to work harder.

In the games that he played, Marsh was expected to do more with the bat. But, he ended up being more effective with the ball. Not a very memorable series for Mitchell. Among the others who get 3 out of 10 are Josh Hazelwood, and Adam Voges, who managed only a handful of reasonable performances.

Michael Clarke (2/10): His constant failures proved that he was no longer fit for international cricket. The only reason he gets two is because he managed to inspire Australia to win at The Oval as the leader playing in his final Test.

Shane Watson, Brad Haddin and Shaun Marsh (1/10): They all played in one Test, and were total failures. One wonders whether they will feature in the Aussie side again.