Fighting fifties from opener Kaushal Silva and skipper Angelo enabled Sri Lanka to maintain control of the Colombo Test on Day 2, as they went to stumps at 304 for 9

Fighting fifties from opener Kaushal Silva and skipper Angelo enabled Sri Lanka to maintain control of the Colombo Test on Day 2, as they went to stumps at 304 for 9, a significant lead of 166. Midway through the day, it seemed as Sri Lanka would squander the advantage like they did in the opening Test. However, Silva held one end up even as wickets kept falling at one end mostly to Yasir Shah once again. Mathews then played a captain's knock to make sure that the hosts did not give away the advantage claimed by the bowlers. He got unexpected support from Dhammika Prasad, who contributed a dogged 35. 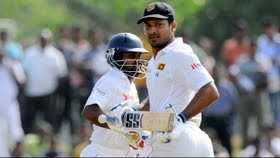 Mathews was the key to Sri Lanka's success on the day even though Silva ended up as the top scorer of the day with 80. Despite continuing in their cautious mode, there was early joy for Pakistan as Kumar Sangakkara and Lahiru Thirimanne were dismissed early in the first session. Mathews then joined Silva and ensured Sri Lanka had no further damage in the session. The pair added a crucial 72 runs as the hosts fought back and regained ascendancy. They were aided by the fact that Pakistan's best bowler of the series Wahab Riaz was ruled out due to injury, and took full advantage of the same.

While Mathews partnership with Silva was crucial in steadying the innings, it was his stand with Prasad that made the bigger difference, as it extended Sri Lanka's lead closer to where they would have liked it. That did not seem possible after Silva's run out was followed by quick dismissals of Dinesh Chandimal and Kithuruwan Vithanage. Both of them fell to extremely poor strokes. Mathews had admitted in the preview to the Test that he wasn't happy with the batsmen's shot selection. Perhaps, Mathews would have had something to say to them in the dressing room.

At an extremely crucial stage in the game, Mathews then led from the front. He found an unlikely ally in Prasad, who looked rather competent with the bat. The duo helped the hosts seize the momentum back after three wickets had fallen for the mere addition of 11 runs. Mathews was lucky on more than one occasion, but rode his luck to put his team on top. He could have been run-out on 25, but survived as Yasir was off balance. Yasir then dropped him on mid-on, when the batsman was on 32. Poor communication however eventually resulted in Silva's run-out, but Mathews made amends for the same in the company of Prasad.

Pakistan were unlucky to have lost Wahab's services. It was clear on Friday how crucial he is to the team's cause. Yasir though continued his fantastic showing with his second consecutive five-for, in the process becoming the fastest Pakistani bowler to take 50 Test wickets. His scalps included those of Thirimanne, Chandimal and eventually Mathews. However, Zulfiqar Babar and Junaid Khan couldn't provide the desired support. Their fielding too let them down. Pakistan will seek inspiration from the Galle fightback as they find themselves against the wall.