Revealed! This is what Dhoni attributes his unique wicket-keeping style to

Returning from illness, Chennai skipper MS Dhoni played the stellar role in steering his side to a massive 80-run win against Delhi

Returning from illness, Chennai skipper MS Dhoni played the stellar role in steering his side to a massive 80-run win against Delhi, and take Chennai to the top of the table.

Chennai recovered from a slow start courtesy Suresh Raina's half-century before Dhoni blasted 44 from 22 balls. Ravindra Jadeja also contributed a quick-fire 25 at the backend. In response, Delhi folded up for 79 with skipper Shreyas Iyer's 44 being the only score of note. Imran Tahir and Ravindra Jadeja ran through Delhi claiming four and three wickets respectively.

Dhoni effected two stumpings with the gloves off Ravindra Jadeja. Talking about his unique wicket-keeping skills, Dhoni was quoted as saying in a Cricket Next report, “I think it's something that's come from tennis-ball cricket. But you still have to do the basics and graduate to that level.

“If you want to keep like that you can make mistakes; so I still think basics are most important." 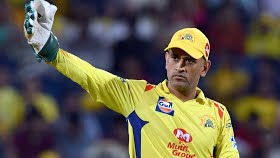 He also ran on a wide to keep the strike in the last over. Explaining the decision, Dhoni added, "It's easier for somebody who has played 10 or 15 overs than somebody who has just come in the bat. I felt it would've been difficult for Rayudu to hit. "

Delhi skipper Iyer, on the other hand, admitted the big loss will hamper their run rate. “It is really going to affect our run rate. The way we chased, it wasn't expected from the batsmen, but it is a good reality check for us. Good that it happened at this stage and everybody would be on their toes in the next game.

"We won't blame the abilities of our team but definitely we didn't play smart cricket," Iyer went on to add after the disappointing defeat.