Zimbabwe caused yet another upset in the ongoing ICC Men’s T20 World Cup 2022 on Thursday, October 27 in Perth, defeating Pakistan by 1 run in a low-scoring contest. Batting first after winning the toss, Zimbabwe were held to 130 for 8 in their 20 overs. However, Pakistan failed to get over the line and were restricted to 129 for 8 in response.

Mohammad Wasim Jr (4/24) and Shadab Khan (3/23) starred for Pakistan with the ball. After Zimbabwe’s openers added 42 for the opening wicket in quick time, Haris Rauf struck by dismissing Zimbabwe skipper Craig Ervine (19) with a quick ball. Wesley Madhevere (17) was then trapped lbw by Wasim Jr.

Zimbabwe bowlers were terrific in defence of a small total, reducing Pakistan to 36 for 3. Babar Azam (4) was dismissed by Evans, while Blessing Muzarabani cleaned up Mohammad Rizwan (14). When Jongwe had Iftikhar Ahmed (5) caught down leg, the match was very much in the balance. 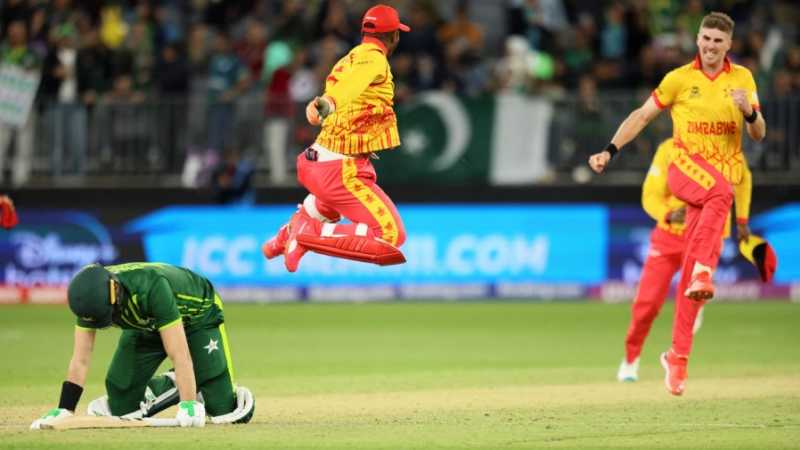 Shan Masood (44) and Shadab (17) added 52 for the fourth wicket to lift Pakistan. However, Raza (3/25) dismissed Shadab, and Haider Ali (0) off consecutive deliveries, before having Masood stumped down leg. Mohammad Nawaz’s 22 brought Pakistan back in the contest. However, he was caught off Evans on the penultimate ball of the match, after which Shaheen Afridi (1) was run-out, attempting a second that would have tied the game.

Speaking after the memorable win, Zimbabwe skipper Ervine said, “(The victory is) So special. Especially for the work we did to get into the Super 12s. We did not want our tournament to end there. We wanted to come in and play some really good cricket against top teams and we did that exceptionally well today.

“I thought after our batting performance, we thought we were maybe 20-25 short, but I thought our seamers hit their straps early on. Raza again came to the party as he always does and picked up a few crucial wickets in the middle there,” he added.

Pakistan captain Babar lamented the team’s poor batting display. He opined, “Very disappointing performance, we are not up to the mark in batting. We have good batters but both openers got out in the powerplay. When Shadab and Shan were building partnership, unfortunately Shadab got out and then back-to-back wickets that pushed us into pressure situation.”