Wellington Test: Jamieson stars on debut as India crumble to 122 for 5

New Zealand pacer Kyle Jamieson made an impressive Test debut claiming 3 for 38 as India were held to 122 for 5 on day one of the first Test against New Zealand at Wellington on Friday. Only 55 overs of play was possible on the opening day due to rain and the wet outfield. Indian vice-captain Ajinkya Rahane was unbeaten on 38 along with Rishabh Pant (10), who was chosen over Wriddhiman Saha.

Earlier, hosts New Zealand won the toss and, not surprisingly, decided to bowl first in helpful conditions on the green top at Basin Reserve. Tim Southee provided the Kiwis with the early breakthrough by castling Prithvi Shaw (16) with an outswinger.

Jamieson then dealt India with a double blow, sending back both Cheteshwar Pujara (11) and India skipper Virat Kohli (2) before lunch. Pujara edged one that straightened to the keeper while Kohli presented a catch to Ross Taylor in the slips. The dismissal meant Kohli’s poor tour, in which he has just managed one fifty, continued 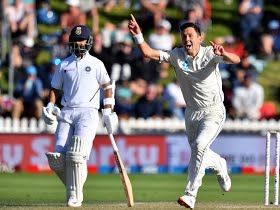 After the loss of three quick wickets, Mayank Agarwal and Rahane featured in a credible rebuilding job. However, just when India’s hopes of a fightback were rising, Agarwal (34) fell to Trent Boult. Mayank attempted a hook shot off the left-arm seamer. However, all he managed to do was give a catch to Jamieson, who came running in from long leg.

The day became even better for debutant Jamieson as he claimed his third wicket by dismissing Hanuma Vihari, as another batsman nicked one behind the stumps. Rahane and Pant took India to 122 for 5 at tea on Day 1. Thunderstorms and rain allowed no further play as the third session was washed out.

A lot will depend on Rahane and Pant if India have to put up a challenging score on the board in the first innings. With the series being of just two matches, India cannot afford to fall too behind early in the contest.