There’s nothing impressive about the man’s personality per se. In fact, he seems pretty much like the man, next door – quiet, unassuming and, to an extent, even shy. Yet, the former South African opener has been the common factor behind the scenes on two occasions, when teams have achieved the number one Test ranking.

There’s nothing impressive about the man’s personality per se. In fact, he seems pretty much like the man, next door – quiet, unassuming and, to an extent, even shy. Yet, the former South African opener has been the common factor behind the scenes on two occasions, when teams have achieved the number one Test ranking. First, he guided India in the winning direction and even oversaw their 50 over World Cup triumph, ending his India stint on an ultimate high.

Kirsten then returned to South Africa, rested for a few months, but was convinced to take charge of his home nation. A year later, the result is out in the open. South Africa were performing brilliantly even prior to Kirsten joining them, but they never managed to scale the summit. It cannot be a co-incidence that both India and South Africa achieved the numero uno ranking during Gary’s tenure as coach. There must be something to it. 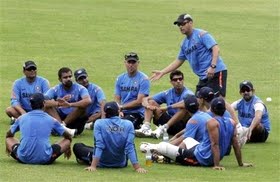 Great players don’t always make great coaches. And while the current South African coach wasn’t a great player, he was a very good one without doubt, and among the finest the country has produced. There is a lot of similarity in the manner Kirsten went about his task as a player and does so now as a coach. He is not one to encourage his colleagues by loud talks or by bossing over the team. Instead, he believes in keeping things simple.

Kirsten knows his job is to be in the background, and let the players stay in the limelight. Unlike some of the other present and former coaches in world cricket, he doesn’t believe in giving extravagant interviews and making tall claims. All he does is inspire the players using his experience earned as a cricketer, and pass on handy tips to struggling guys. In short, Kirsten knows his job well, and the team is reaping benefits of the same.

Of course, the coach alone cannot be credited for a team’s success. Cricket is, after all, a team sport. But what Kirsten has done well is make the job for his players easier. A glance at the former cricketer’s coaching routine makes it amply clear that all he does is to try and play the role of a big brother to perfection. If a batsman is struggling, Kirsten is always there to work out on his flaws. The Indians were wholehearted in the praise of the South African, just as they were vocally opposed to the allegedly authoritarian regime of Greg Chappell, although it must be said that Chappell’s stint also benefited Indian cricket, as they set a record for the number of successful run chases in ODIs.

The tougher test for Kirsten as coach will be when he travels to the subcontinent along with the team. If he can play a part in aiding the Proteas win series’ in spinning conditions, Kirsten will go down in history as one of the greatest coaches ever.