Australia did not go into the first ODI of the Chappell-Hadlee Trophy against New Zealand in a great frame of mind. They had lost the Test series 2-1 to South Africa at home. Before that, the same side had thrashed them 5-0 in one-dayers.

Australia did not go into the first ODI of the Chappell-Hadlee Trophy against New Zealand in a great frame of mind. They had lost the Test series 2-1 to South Africa at home. Before that, the same side had thrashed them 5-0 in one-dayers. But, the Aussies did win the last Test at Adelaide against the Proteas. And, that definitely gave them some confidence as they headed into the first ODI at Sydney. And, they put the positives gained to full use. What would have impressed the Aussies the most was the fact that their under-fire skipper stood up and delivered. Both with the bat and as leader, Steven Smith had a point to prove. And, he rose to the occasion, with a splendid hundred and a stunning catch.

What Smith's superb innings has done is that it has put the visitors in a must-win position if they want to harbour hopes of winning series. They were just not in their elements in Sunday's match. Their bowling was underwhelming, and fielding surprisingly poor. And, with the bat, it was only Martin Guptill, who came up with a fluent hundred, his first against Australia in international cricket, and Colin Munro to an extent, who stood up to the challenge posed by the Australian bowlers. At the end of the day, New Zealand's 68-run defeat was a fair indication of how comprehensive a loss it was. The visitors will thus need to make significant improvements at Canberra.

New Zealand's bowlers too must lift their game in the do-or-die encounter. Tim Southee was rested for the first ODI, and his absence hurt the visitors badly. He should be back for Tuesday's clash, and could replace either Colin de Grandhomme or the debutant from the previous match, Lockie Ferguson, who was torn apart by Australia's batsmen. With Southee joining Trent Boult at the top, the attack gets a potent feel. And there is also Matt Henry, who can strike key blows. The Kiwis will need to raise their batting, which means runs would be expected from in-form opener Tom Latham and skipper Kane Williamson. Both of them fell cheaply in the last match, which hurt the Kiwis in a big way.

Having experienced a lot of reserves in recent times, Australia would be keen to get a series victory under their belt. And, they wouldn't want to wait till the last match for that to happen. As mentioned to earlier, Smith stood out with his hundred in the first match. In addition, there were good support acts from Travis Head, who chipped in with a fighting half-century, and Matthew Wade, whose quick cameo gave them the cushion of some additional runs. But, they did lose a few early wickets. David Warner, Aaron Finch, George Bailey and Mitchell Marsh will be expected to come up with significant contributions in Tuesday's match. 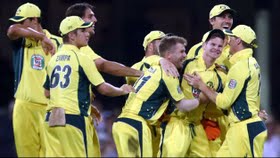 On the bowling front, Australia were highly impressive on Sunday. Josh Hazlewood led the way knocking out Latham and Williamson early. The pressure that was built was kept on till the end as the other bowlers also chipped in. Mitchell Starc and Adam Zampa supported Hazlewood very well, while Marsh was also reasonably good. Australia should look to continue in the same vein at Canberra as well. Their fielding was slightly off-boil in the first ODI, as was the case with New Zealand. So that is one area where they need to improve as well.