Leg-spinner Shreyas Gopal was the star of the match as Rajasthan overcame Bangalore for their maiden win in Indian T20 2019. Gopal finished with sensational figures of 3 for 12 to set up the victory for the Rajasthan as Bangalore remained winless.

Gopal's scalps included both the class batsmen of Bangalore -- skipper Virat Kohli and AB de Villiers, both of whom were bamboozled by the spinner. Both Kohli and de Villiers failed to read Gopal's googly and were done in. Gopal also dismissed the struggling Shimron Hetymyer for 1 from 9 balls.

"I feel a bit lucky at the moment. Everyone knows Kohli and AB are world-class players. And for a youngster like me to get both of them out, it's one of the biggest moments in my journey," Gopal said while speaking to the broadcasters after the game. 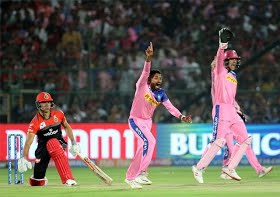 On bowling the googly, he added that it was his gut feeling that worked. "It's important to mix wrong'uns and the leg break. Wanted to bowl stump-to-stump, and wanted them to hit down the ground off the back foot. The first-class season was important, and doing well over there got me confidence."

Gopal's three-for was instrumental in reducing Bangalore to 158 for 4. In Rajasthan' chase, Jos Buttler hit yet another fifty. After Yuzvendra Chahal took out Buttler and Ajinkya Rahane Steven Smith made his first significant contribution with 38.