Diana Edulji on Mithali Raj controversy: We can’t be questioning the team eleven

Committee of Administrators (CoA) member and former India skipper Diana Edulji has said that the furore over the dropping of Mithali Raj from the women’s World T20 semi-final is unnecessary and that the team management’s decision cannot be questioned.

“I think too much is being made out of it. The management made the decision of not changing a winning combination and that backfired. If India had won the game, I am sure nobody would have questioned their decision,” Edulji was quoted as saying in a PTI report. 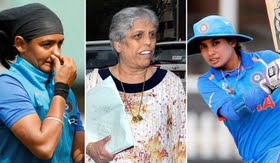 Giving the example of Krunal Pandya, Edulji added, “We can’t be questioning the team eleven. Another example is of Krunal Pandya, who was thrashed in the first T20 but bounced back strongly yesterday. These things happen in the game.”

Edulji also felt Raj’s manager Annisha Gupta’s extreme views on the issue were unwanted. “As I see it. It was just a bad day for India. The batting failed and when England were chasing, the dew made it tougher for the bowlers. The performance was unexpected, especially after the big win against Australia,” she added in the PTI report.