Pakistan came up with a terrific all-round show to defeat New Zealand by seven wickets in the first semi-final of the ICC Men’s T20 World Cup 2022 at the Sydney Cricket Ground (SCG) on Wednesday, November 9. Batting first after winning the toss, the Kiwis put up 152/4 in their 20 overs. Pakistan chased down the target in 19.1 overs.

New Zealand got off to a poor start as they lost Finn Allen for 4 in the first over of the chase. He was trapped lbw by Shaheen Afridi with a full and straight delivery. Devon Conway was then run out for 21, caught short of his crease by a direct him from Shadab Khan. Glenn Phillips (6) chipped a return catch to Mohammad Nawaz as New Zealand lost three for 49.

Kane Williamson (46 off 42) and Daryl Mitchell (53 not out off 35) added 68 runs for the fourth wicket. However, the New Zealand skipper could never got going and was eventually clean bowled as he missed a scoop off an Afridi slower ball. Jimmy Neesham managed only 16 not out in his 12 balls, hitting only one four. Mitchell found a few big hits to take the Kiwis past 150. 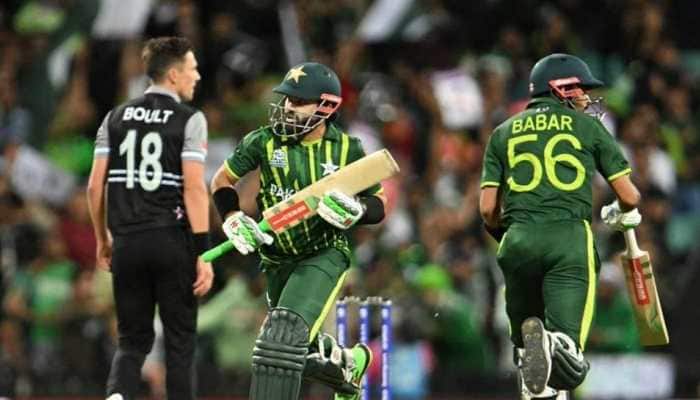 The total proved highly inadequate as Babar Azam and Mohammad Rizwan lifted their game on the big day and added 105 for the opening wicket. Babar struck seven fours in his 53 off 42 balls, while Rizwan hit five boundaries in his 43-ball 57. Both batters fell to Trent Boult. However, Mohammad Haris (30 off 26) played another impressive cameo to take Pakistan closer to victory. He hit a four and six off consecutive deliveries against Lockie Ferguson.

Reflecting on the win, Pakistan skipper Babar said, “Thanks to the crowd. We feel like we're playing at home. Got a good start with the first 6 overs with the ball. Later on the ball didn't come on well. Fast bowlers finished well.

“We planned before going that we'll utilise the powerplay. He's a young guy and showing his aggression (Haris). He's playing very well. We're going to enjoy this moment. But at the same time have focus on the final,” he concluded.

Pakistan will now meet the winner of the second semi-final between India and England. The final will be played at the MCG on Sunday, November 13.