A terrific month and a half for Sri Lanka

The Sri Lankan team is currently basking in the glory of a wonderful World T20 triumph. Undoubtedly, they deserve all the praise that is coming their way.

The Sri Lankan team is currently basking in the glory of a wonderful World T20 triumph. Undoubtedly, they deserve all the praise that is coming their way. But, while Sri Lanka played brilliantly to clinch their first World title since 1996, it has been their consistency over the past month and a half that has been extremely impressive. They arrived in Bangladesh and remained unbeaten en route to winning the Asia Cup. Even in the World T20, they lost only one match, and beat India in the final with a wonderful all-round effort. 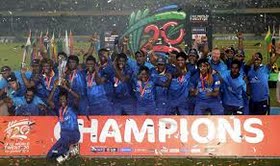 Along the course, Sri Lanka discovered some new heroes and saw some established names from the team stand up again to deliver when it mattered the most. Lahiru Thrimanne, for one, grabbed this opportunity with both hands. In recent times, he has constantly been in and out of the team. But, in the Asia Cup, he made a serious impression beginning and ending the series with a century, and deservedly ending up as the man of the tournament. In fact, he was among the key reasons why Sri Lanka remained unbeaten throughout the event in a near flawless performance.

As he has done so often in the past, Lasith Malinga once again made a serious impression. He was potent throughout the event and rarely gave the opponents any breathing space. If Thirimanne began and ended the series with hundreds, Malinga got five-fors in the first match and final of the series, both against Pakistan. Thanks to his superlative efforts, Pakistan could never create any kind of impression on the Sri Lankan bowlers. With the top run-scorer and top wicket-taker being Sri Lankans, it was only fair that the Asian side ended up winning the Asia Cup trophy once again.

The Lankans continued their good run in the World T20 as well, which was also held in Bangladesh. It helped their confidence that Sri Lanka had won the Asia Cup in the same country and had become accustomed to the conditions in comparison to most of the other teams barring the Asian sides. They showed a lot of guts throughout the event, which was the evident in the manner in which they clinched a close match against the South Africans. But for the loss against England in the Super 10s, they were unstoppable throughout the World T20.

Although not a single player featured among the top run-scorers or the highest wicket-takers, their men delivered at key moments during the series. Their World T20 campaign could have been over against New Zealand, but Rangana Herath pushed them through to the semis with a magical spell of left-arm spin bowling. After a thoroughly all-round effort in the last four against West Indies, Kumar Sangakkara, Malinga and Kulasekara brought all their experience into play to win the trophy. Sri Lanka had finished second best in many major finals in the past. On this occasion though, they were too inspired to lose again.