India won the third Test of the series against Sri Lanka by 117 to clinch the series 2-1, and record their first series win in the country after 22 years.

India won the third Test of the series against Sri Lanka by 117 to clinch the series 2-1, and record their first series win in the country after 22 years. We take a look at the men who made the difference in the match for the hosts.

Cheteshwar Pujara: How fortunes can change. If not for injury, Pujara wasn't even in the scheme of things for India. But, left with no option, Virat Kohli asked Pujara to open. And boy, did he deliver. As it is, Pujara was batting at an unfamiliar position, not to forget that he was under extreme pressure having lost his place in the side owing to poor form. To top it all, the pitch was extremely conducive to fast bowling, with the amount of green on it. Pujara had everything going against him. And yet, he knuckled down a produced a performance that he would be really proud of. To carry you bat on a surface where most other batsmen in the side have struggled was a fantastic effort. Not surprisingly, he was chosen as the man of the match.

Amit Mishra: More than the ball, Mishra made an extremely important contribution with the bat at the SSC. In the first innings, when Pujara was battling it out all alone, and was seeking some support from the other end, it was Mishra who stood with him. He may have looked a bit awkward while playing some strokes, but he did his job for the team. His half-century featured some pleasant hits as well. More significantly, he helped Pujara to take India closer to 300, a very good total on the surface. In second innings as well, he played an important role with the bat as India looked to set a target. And, he also had the distinction of ending the Test by trapping Nuwan Pradeep lbw. 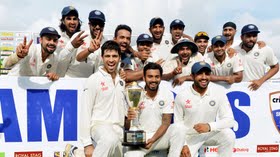 Ishant Sharma: His behaviour in the Test might be a cause of worry, but his performance certainly wasn't. Ishant put the ball in the right areas, never let the batsmen relax even when the wickets weren't coming, and bowled some unplayable deliveries as well. His line just outside the off stump forced most batsmen to play at it, and he was successful in inducing a number of edges. His eight wickets in the match was that kind of performance India have been hoping for from their strike bowler. The delivery to dismiss Angelo Mathews in the last session was a peach, and paved the way for India's triumph.

Ravichandran Ashwin: The offie had a wonderful series, to be adjudged man of the match. And, while Ishant was undoubtedly the bowling hero at the SSC, Ashwin played his part as well. There wasn't much for him to do in the first innings. But, in the second, he contributed with both bat and ball. Ashwin returned to batting form, with a half-century that enabled India to set a target closer to 400. With the ball on the final day, he broke the defiance of Kusal Perera, who seemed to be scripting something famous in the company of Mathews, and then ran through the tail.

Rohit Sharma: If you look at his scores at face value, it was another failure for the overrated batsman. But, in the context of the match, his second innings half-century was extremely crucial. India had lost three wickets early, and Kohli too departed after getting himself in. Had India lost Rohit as well, they would have been in severe danger of getting bowled out cheaply. However, Rohit hung around, and brought up a fluent half-century, which nudged India's lead into the safe category. That he threw it away after that is another matter altogether.