Former BCCI president Anurag Thakur on Thursday tendered a fresh 'unconditional' and 'unequivocal' apology in the Supreme Court. Thakur was asked by the apex court to tender an apology

Former BCCI president Anurag Thakur on Thursday tendered a fresh 'unconditional' and 'unequivocal' apology in the Supreme Court. Thakur was asked by the apex court to tender an apology in explicit terms to get relief from the contempt proceedings initiated against him, said a report in PTI.

"I humbly submit that it was never the intention of the deponent to undermine the majesty of this court and since unintentionally some kind of misinformation and miscommunication has occurred, I unhesitatingly tender my unconditional and unequivocal apology to this court," Thakur said in his affidavit. 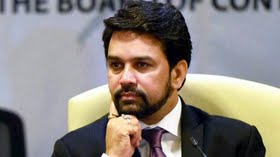 SC had asked him to file a "one-page short affidavit" tendering an apology saying that it was not going to consider his earlier affidavit of apology. The court also asked Thakur to be present on July 14 to tender the apology.

Senior advocate P S Patwalia, appeared for Thakur said while his client was willing to tender an unconditional apology, he had a very good case on merit through which it can be proved that he did no wrong.