Pakistan makes serious inroads after getting bowled out for 226

Pakistan hold a definite advantage in the Pallekele Test after reducing Sri Lanka to 44 for 3 by the close of Day 1. It was a strong fightback from the Pakistanis led by left arm quick Junaid Khan after the visitors were bundled out for 226.

Stumps on Day 1: Pakistan hold a definite advantage in the Pallekele Test after reducing Sri Lanka to 44 for 3 by the close of Day 1. It was a strong fightback from the Pakistanis led by left arm quick Junaid Khan after the visitors were bundled out for 226.

The final session on the opening day’s play saw as many as eight wickets go down! First, Pakistan resumed the session at 172 for 5. Very soon they lost their sixth wicket when Mohammad Sami (9) was bounced out by Angelo Mathews in a pull shot. Adnan Akmal, who retired hurt in the previous session, came out to join Asad Shafiq and looked good to put up a partnership of sorts. But in the 63rd over, Adnan Akmal (24) threw his wicket away attempting a slog sweep off Rangana Herath to get bowled leaving Pakistan at 198 for 7.

Sri Lanka didn’t waste much time and wrapped up the Pakistani innings by the 73rd over. Asad Shafiq’s end came when he was forced to glove a viciously turning and jumping delivery from Herath to the keeper. Shafiq top scored in the Pakistani innings with 75 (from 158 balls with 10 fours). Thisara Perera finished with 4 for 63 while Herath contributed significantly with 3 for 40. 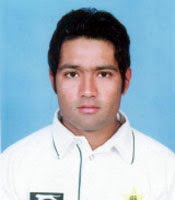 The Sri Lankan innings got its first jolt when an uncomfortable looking Dinesh Chandimal (8 from 29 balls) was trapped lbw by Junaid Khan in the 8th over with an inswinger from round the sticks. Three balls later, Junaid cleaned up Kumar Sangakkara for a duck with a delivery that nipped back through his gate.

Sri Lanka from 14 for 2 was looking good to see through the close of play but a deadly yorker from Mohammad Sami smashed the toe of Mahela Jayawardene (12 from 24 balls) to have him lbw in the final over. Tharanga Paranavitana survived with an unbeaten 13 and will be joined tomorrow morning by Thilan Samaraweera with Sri Lanka trailing behind by 182 runs.

Tea on Day 1: Pakistan had a much better session in the afternoon as they progressed to 172 for 5 in 55 oversby Tea. Young Asad Shafiq is holding the innings together with an unbeaten 54 (from 126 balls with 7 fours).

Asad Shafiq controlled much of the post lunch session along with Skipper Misbah-ul-Haq to steady the ship for Pakistan. However, against the run of play, Misbah-ul-Haq (40 from 95 balls with 7 fours) poked away from his body to an away going delivery on the backfoot from Thisara Perera to edge it behind to the keeper. It was an end to a promising stand of 85 runs for the fifth wicket.

Pakistan suffered another blow just before Tea when Wicket Keeper Adnan Akmal (10 from 11 balls) was hit on his little finger by a nasty lifter from Dilhara Fernando which forced him to retire hurt. At Tea, Pakistan has Asad Shafiq battling it out with fast bowler Mohammad Sami (8*).

Lunch on Day 1: Sri Lanka had a perfect morning session at Pallekele as they reduced Pakistan to 81 for 4 in 30 overs after winning the toss and bowling first. The hosts had to wait for more than 30 minutes before their decision to bowl first was proved right.

Thisara Perera provided the first success in the 8th over when he went through the gate of Mohammad Hafeez (22 from 27 balls) in a forward defence with one that had nipped back. In the 10th over, Perera struck again when a nervous Azhar Ali (0) was lured into a false drive to edge him into the safe hands of Samaraweera at gully.

In the 13th over, Nuwan Kulasekara came up with a deadly blow removing veteran Younus Khan for a duck, as he poked at an away going delivery on the backfoot to edge it to the keeper. Three overs later, opener Taufeeq Umar (29 from 46 balls) was trapped plumb infront of the stumps after missing a full length delivery from Perera which had nipped back.

Toss and Teams: Sri Lanka have won the toss and elected to bowl first at the Pallekele International Stadium, Kandy in the Third and Final Test. The pitch here has a greenish look to it which has influenced both the sides to boost their respective pace attacks.

The Sri Lankans have received a huge blow with the in-form Tillakaratne Dilshan taking leave to stay with his children, who aren’t well. Dinesh Chandimal takes his place and will open the bowling. The other changes are Suraj Randiv and Nuwan Pradeep getting replaced with Thisara Perera and Dilhara Fernando.

Pakistan have made two changes with Umar Gul and Mohammad Sami coming in for Abdur Rehman and Aizaz Cheema.