If you think Sourav Ganguly has performed bad in DLF IPL 2012, think again after reading this.

Sourav Ganguly has a strike rate of 100.77 in the ongoing IPL season but his team has not been performing very well. While many batsmen from other teams have poor strike rates than him still everyone finds it alright to criticise Ganguly only.

Sourav Ganguly has not had a good IPL so far, as far as his batting is concerned. His slow strike rate has been one of the most talked about in recent times. His strike rate of 100.77 has been one of the worst in the current season. He has received several criticism from cricket fans as well as cricket experts for the same. Other cricketers in the ongoing IPL have also been scoring at the same rate as Ganguly but why has only Ganguly's strike rate being highlighted. 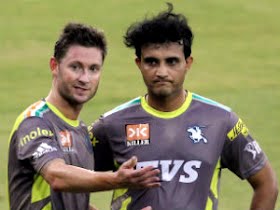 Kallis, who has been known for his batting skills has a strike rate of 100.00 in his 11 innings played so far. It is in fact, one of the lowest during the season so far. Sahara Pune Warriors batsmen M. Samuels also has been on the slower side, irrespective of his well-known big hitting skills. His strike rate is 100.81 for the season. Virat Kohli, known for his aggressive intent, has also failed with a mere strike rate of 103.08, as per cricbuzz.com. Yet, these player's strike rates are not talked about in a negative manner.

Ganguly has been unlucky as his team, Pune Warriors has also not been performing during the IPL. His team is struggling at the bottom half of the IPL standings. They might not make it to the playoffs too. So, when the team's performance is accessed, Sourav Ganguly would be the main target for his slow batting. Had he been playing for a team such as Delhi Daredevils or KRR, his batting would have taken a backseat, as these teams have been performing decently in the IPL. It is only when teams are playing bad cricket that scapegoats are produced.