A comfortable win in the end for the hosts. This is their 5th straight win at home, it is turning out to be a sort of fortress for them. They now move to the top of the table with 10 points, ahead of Hyderabad on run-rate. The bowling was outstanding once again, with Vinay Kumar and RP Singh taking 3 wickets each. 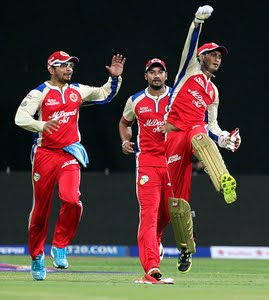 Vinay Kumar is the Man of the Match: 'I am very happy, the team is doing very well and we are doing nicely as a bowling unit. I wanted to bowl a bouncer to Binny, then I decided to bowl a bit wide outside off. The wicket in Bangalore is good for the bowlers. I will try to adjust to different venues and bowl well.'

Virat Kohli: 'Happy with the outcome, did not finish in the last over (chuckles). The bowlers created pressure and that made them play some bad shots. I just told the bowlers to make their plans and the field would be set according to those. It was a smart chase, Chris and Saurabh batted very well to finish the chase well.'

Rahul Dravid: 'Lovely to come back and play in Bangalore. Grateful for the reception when I went out to bat. Bangalore outplayed us today. It was a 150 wicket, we did not pace our innings well. Our batting order is not that deep, we did not have that one recognised guy in the end overs. I think we played pretty well for some part of the day. Our bowlers did really well, but they did not have a total to defend. Gayle batted very well and in a different manner. It was a tough decision to play Tait instead of Cooper today.'

Shane Watson needs two more sixes to become the leading six-hitter for Royals. He is currently on 60, behind Yusuf Pathan (now with Kolkata Knight Riders).

Royal Challengers lead the head-to-head record with five wins, while Royals have four.