His line-length is very good and has improved a lot: Pujara praises Lyon

India’s No.3 batsman Cheteshwar Pujara reckons that Australia’s off-spinner Nathan Lyon, who dismissed him for the 10th time in Test cricket, has displayed tremendous improvement as a bowler in the last four-five years.

Lyon, who began the Test with 390 victims, finished with figures of 1 for 68 after 21 overs. Pujara admitted that playing Lyon is a tough job.

"Lyon has improved as a bowler in the last four-five years. He likes to bowl and he wants to bowl as many overs as possible. His line length is very good and has improved a lot, I feel," Pujara said during a virtual press conference.

The man who scored 43 from 160 balls added that Lyon is someone who just enjoys bowling. "That's (line length) something that helps him and he likes taking the challenge and he is someone who enjoys his bowling. But as a batsman, I feel you got to be prepare and try and score as many runs possible," he further said. 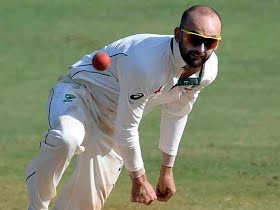 On his experience of batting at the Adelaide, Pujara stated that batsmen need to spend enough time at the crease to get their eye in.

"The more you play pink ball, you get used to it. But I feel there is enough in it for fast bowlers and the way they bowled we had to build a partnership," said Pujara.

"I don't think it was a flat pitch where you can start playing your shots and keep scoring runs. So it's a pitch where you need to give enough time as a batsman," he added

For Australia, left-arm seamer Mitchell Starc claimed 2/49 while Josh Hazlewood and Pat Cummins chipped in with a wicket each. The biggest wicket of the day fell via a run out as Virat Kohli (74) was stranded following a terrible mix-up with vice-captain Ajinkya Rahane (42).