Pak vs ENG 1st Test Day 3 report, Live score: Alastair Cook was in his element as he dug in for more than eight hours to put England on course to save the first Test against Pakistan at the Zayed Cricket Stadium.

Alastair Cook was in his element as he dug in for more than eight hours to put England on course to save the first Test against Pakistan at the Zayed Cricket Stadium. Cook scored his 28th Test century and in the process put two crucial partnerships for the team. First he added 116 runs with Moeen Ali for the first wicket and then 165 runs with Ian Bell for the second wicket. After getting a lucky escape from Pakistan, Bell also scored a classy half century. Though he was not in his full flow but it was a crucial run in the context of this game and his personal career as well. With two century partnership, England were at 290 for three at the time of stumps. 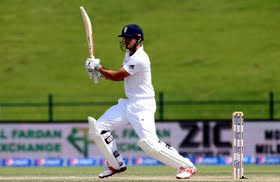 Cook's latest century means he has also gone above Kevin Pietersen to stand alone with 33 across the international formats, including eight in Tests in Asia - the most by any non-native of the sub-continent. He has done his captaincy stature no harm either, ensuring England would not fold easily here in a match notable for the lack so far of a single wicket to any spinner in a world-record 130 overs. Half-an-hour before lunch, Moeen departed to seam for a painstaking 35 from 131 balls, edging a good delivery from Imran Khan that left him off the pitch and carried low to wicketkeeper Sarfraz Ahmed. However, Pakistan's attack didn't have much fun at all, toiling away in the blazing heat on a flat, lifeless deck to make just three breakthroughs all day. Somewhat incredibly, only 11 wickets have fallen in three full days of play. Throw in the fact that Pakistan essentially threw most of their wickets away in pursuit of quick runs and that one of England's victims was a nightwatchman, and it's fair to say the track is placid. Compare this to the Ashes when, while games were short and often finished in less than three days, it was a drama-filled rollercoaster of emotion.

While the match seems dead and buried, there is still, just about, enough time for something remarkable to happen. Once these dry pitches start to break up, they can disintegrate very quickly, and England, still 233 runs behind, so they need to bat well tomorrow. A few early wickets and they could find themselves under heavy pressure for a couple of sessions on Day 5.