Rohit Sharma and the pressure of being a record holder

How does one look back at Rohit Sharma's international career thus far --underachiever? record breaker? sensational talent? Perhaps, a mix of all the above and more. And, now that he has broken the record

How does one look back at Rohit Sharma's international career thus far --underachiever? record breaker? sensational talent? Perhaps, a mix of all the above and more. And, now that he has broken the record for the highest one-day international score, and that too by some distance, he has once again become a great influence on Indian cricket. But, more than confidence, the awe-inspiring knock would put further pressure on Rohit as he heads into the Australia series Down Under. It remains to be seen how he responds to the challenge in Australia following the super return to international cricket after a break due to injury. 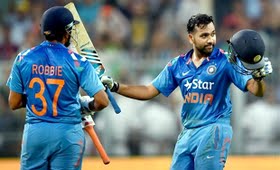 There is a fair reason why Rohit will be under the scanner during the Australia series. While the Mumbai batsman made a sensational debut at home with two back to back Test hundreds against West Indies at home, he struggled during the series that followed in South Africa. In fact, there were games when he could not even get bat to ball. Following his failures in South Africa, questions were asked about whether he was only a flat-track bully. He did make a couple of scores of note, but they were nowhere as convincing as his performances at home. His away figures are rather disappointing.

Rohit is now in a similar situation to what was the case in South Africa. He will again head into a big away series having scored a double century at home in a one-day series. This time, he went a step ahead and broke the record. As such, a lot would be expected as he heads to Australia for a tough tour. Rohit himself knows that he has a point to prove. If he doesn't fare well in Australia this time round, question marks will certainly be raised about his ability. The true test of a batsman comes when he scores big away from home, which is why the Australia series will be so significant for the Mumbai lad.

It would be interesting to see how India fit in Rohit in the Test squad. While Rohit is a certainty in the shorter formats, the same cannot be said about him in the five-day version. With numbers one to five all filled up, the number six is the only vacant spot. Rohit will be battling for that spot along with Suresh Raina. Interestingly, both the batsmen are in good one-day form. It remains to be seen who gets the chance and utilises the opportunity in Australia. Both are likely to feature in Tests at some point or the other, so it would be an intriguing battle.

Rohit was part of the Test squad back in 2011-12 as well, but failed to play a single Test since the Indian team management was content continuing with non-performing players. Rohit however does have previous experience of Australian conditions, during which he tasted decent amount of success. We are referring to the 2007-08 CB Series, in which Rohit played a crucial role although those were still early days in his career. Now, with plenty of experience under his belt, he will he looking to excel again. Unlike in 2007-08 though, Rohit will be under pressure this time -- the pressure of being a record holder.