India has announced its T20I and ODI Squads for the upcoming series against Pakistan. India plays two T20Is and 3 ODIs against Pakistan starting from December 25th. There was a lot of speculation that Sachin Tendulkar will be included in the ODI Squad but the legendary batsman quashed all that by announcing his retirement from the shorter version of the game. The Selectors have ignored Zaheer Khan although it is understood that the left-arm fast bowler is now keen on keeping himself ready for the next series. The 34-year-old Virender Sehwag was included in the ODI team but finds himself out of the T20 squad perhaps hinting that he is no longer being considered for the shortest format of the game. 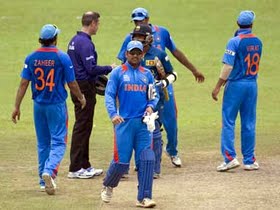 The Selectors have given a maiden call to Bengal fast bowler Shami Ahmed who has been named in the ODI Squad. The 22-year-old has a contract with the Kolkata Knight Riders and has been amongst the wickets in the ongoing Ranji Trophy matches. Parvinder Awana has been retained in the T20I Squad but is not in the ODI Squad. His new ball partner Ashok Dinda who has bowled at brisk speeds like him is in both the squads.

Meanwhile in the quest of having an all-rounder in the team following the injury to Irfan Pathan, the Selectors have gone in with Uttar Pradesh lad Bhuvneshwar Kumar in both the T20I and the ODI Squad. Attractive middle order batsman AT Rayudu has been retained in the T20I Squad. Other notable selections are Piyush Chawla getting retained in the T20I Squad while he lost out to Amit Mishra in the ODI Squad. Surprisingly, experienced off-spinner Harbhajan Singh has been totally ignored by the Selectors.