IPL 8 34th T20 SRH vs CSK Preview, Live Scores: Sunrisers Hyderabad will be faced with a massive task when they take on Chennai Super Kings in the second match of the day at the Rajiv Gandhi Stadium in Hyderabad on Saturday.

Sunrisers Hyderabad will be faced with a massive task when they take on Chennai Super Kings in the second match of the day at the Rajiv Gandhi Stadium in Hyderabad on Saturday.

Although Sunrisers were successful in their last match and Chennai lost their most recent clash, the latter would still be confident of putting it across Sunrisers when the teams meet for the second time this season. The last time these two sides met, the result was on expected lines. Chennai beat Sunrisers by 45 runs. Sunrisers go into the match having defeated Punjab by 20 runs. On the other hand, Chennai went down to Kolkata on Thursday by 7 wickets. But, that would count for little as these two teams clash. 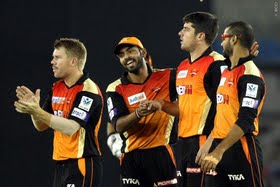 The star performers for Sunrisers will have to be on top of their game if they hope to upset Chennai. The problem for Sunrisers is that they have very few trump cards, which is why they are languishing below in the points table, with only six points from seven matches. Sunrisers are heavily dependent on their skipper David Warner, and the Aussie southpaw has rarely disappointed. He has been the standout performer for the team with the bat. Most of Sunrisers' wins have been thanks to his aggression. Shikhar Dhawan has given him good support. But, they need more out of the likes of K L Rahul, Naman Ojha and Ravi Bopara among others.

Sunrisers have been good in the bowling department. Trent Boult has continued the excellent form he displayed in the World Cup. He was preferred over Dale Steyn in the last game, and answered the team's call with a match-winning spell. In fact, Sunrisers' bowling has been surprisingly effective overall. Praveen Kumar has brought all his experience into play while Bhuvneshwar Kumar has kept things extremely tight. Moises Henriques bowled well in the last game. In the spin department, Karn Sharma has not been consistent, but made an impact in the last game.

Chennai, on the other hand, will be keen to return to winning ways. Their loss against KKR can be seen as a one-off. Dwayne Smith has been in excellent form, and his first-ball dismissal against Kolkata proved how crucial he is to the team's cause. Chennai would like another good start from Smith and Brendon McCullum, who briefly shone in the last match. The overall batting performance of Chennai in the match was disappointing, but the likes of Suresh Raina, Faf du Plessis, Dwayne Bravo and MS Dhoni can definitely turn matches around with the bat. Chennai have a competent bowling line up as well, led by the experienced Ashish Nehra. Mohit Sharma has supported him very well. Pawan Negi and Ravindra Jadeja have also provided decent follow up. Bravo too has made an impression with his variations. Chennai are well placed to qualify for the play-offs, but they would be keen to return to winning ways following the reversal against Kolkata.