Kohli: If you didn't have intent, it would've been difficult to survive

Indian skipper Virat Kohli made some interesting observations after rain-hit first Test ended in a draw. Although almost two full days were lost due to rain,

Indian skipper Virat Kohli made some interesting observations after rain-hit first Test ended in a draw. Although almost two full days were lost due to rain, India came within three wickets of winning the Test.

“It was important to make something out of the game with whatever time we had. Conditions changed drastically over the five days. We had to show character, having been on the backfoot on day one and day two. Credit to Sri Lanka. The team showed a lot of character. We didn't look at the batting collapse. We believed in our strengths.

He added,” If you didn't have intent on this wicket, it would've been difficult to survive. That was the key. If we got enough good balls in the right areas, it would've been tough. All in all, we're proud of how we finished. 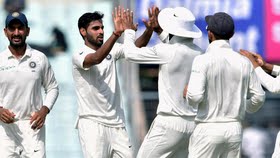 Praising Bhuvneshwar, Kohli added, “His bowling has picked up pace, his ball is heavier than what it used to be. He grabs his chances every time he comes into the team. He's a massive contender to start in every Test for India, he'll be a vital part of our plans, especially overseas.”

On his own innings, he said, “(50 international hundreds) feels good. It hasn't been a long journey yet. If I can step up and perform, that will give me more pleasure than thinking of the number of hundreds I have. That will remain the mindset till I play this game.”