Pakistan are on course of victory after Younis Khan century

Pakistan is just seven wickets away from crushing England in the second Test at Dubai and taking a crucial 1-0 lead in this three match series.

Pakistan is just seven wickets away from crushing England in the second Test at Dubai and taking a crucial 1-0 lead in this three match series. This will also mean that they can’t lose the series if they go on to win this game. Pakistan grabbed three key wickets including the key scalp of Alastair Cook to sense victory in the second Test against England after Younis Khan smashed a century here on Sunday. Pakistan will need another seven wickets to force a 1-0 lead in the three-match series after Younis's brilliant 118 helped them set a daunting 491-run target for England. At the close of the play on day 4, England were 130 for 3, Joe Root was again fighting for the visitors for 59 and with him Jonny Bairstow was unbeaten on six as they still need another 361 runs to win the game or play out the full fifth day to avoid a loss in the second test. It will be a tough task for the England batsmen as the pitch was offering turn with leg-spinner Yasir Shah and left- armer Zulfiqar Babar posing a real threat.

Earlier Pakistan declared 35 minutes after lunch, with Younis scoring his 31st century, Misbah-ul-Haq 87 and Asad Shafiq making 79. Younis Khan put England to the sword by scoring the 31st century of his impressive career, an innings which also saw him pass the 9,000 Test runs milestone. The knock was a typically calm and composed effort by Pakistan's all-time leading Test run scorer, occupying 193 balls, 11 of which were hit to the boundary. By the time he was dismissed by Adil Rashid, skying an aggressive shot when trying to increase the run rate, he'd led his side to an almost unassailable position. 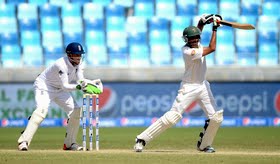 England were tottering at 45-2 at tea but Ian Bell (46) and Root defied Paksitan bowling during their 102-run stand for the third wicket and looked to take England safely to stumps. But Babar broke the partnership when he spun a sharp delivery which Bell tried to leave but gloved it to the slip where Younis took an easy catch. Pakistan reviewed the not out decision by Australian umpire Bruce Oxenford and were duly rewarded. Bell hit four boundaries during his 121-ball resistance packed knock. The promotion of Moeen Ali to opener has been far from successful so far with the flamboyant left-hander registering scores of 35, 11, 1 and 1 in the two Tests. And his dismissal here, edging a wide delivery from Imran Khan to second slip, was not a shot the situation demanded. With his spin bowling, though harshly treated by Pakistan, still in demand, it is unlikely that Ali will be dropped but it wouldn't be a huge surprise to see Alex Hales playing in Sharjah.