Recent Matches results
(Completed matches, most recent first)
Pakistan L L W L W
Australia L W L L W
pitch report:
The Sharjah pitch will probably offer some turn but there should also be plenty of runs available. The two most recent ODIs at the venue provided first-innings totals in the 320s. The forecast for Tuesday is for a sunny day with a top of 34C. 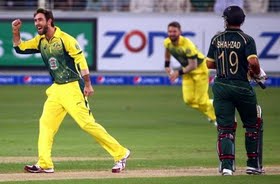 Preview :
After Pakistan's heavy defeat in the T20, Umar Akmal was mentioned by the coach Waqar Younis as a player who needed to lift. "We speak about his talent. He hasn't really delivered. We have to really speak to him and maybe try different things with him," Waqar said. Strong words from a coach. Over the past year, Umar has averaged 31.33 in ODIs but those figures are skewed by an unbeaten 102 against Afghanistan. He'll be looking for a big series - if he even gets the chance, with wicketkeeper Sarfraz Ahmed also in the squad.
Having missed the T20 as he continued his recovery from a rib injury, Mitchell Johnson has been increasing his workloads in the nets, and the captain George Bailey believes he should be fit for the first ODI. "The beauty of Mitch is that he does something very few people in the world do," Bailey said. "It's a real strike weapon for us. He can get something out of a wicket that no one else can. In many respects that's when he's at his best."
Pakistan's poor batting in the Twenty20 international on Sunday was not an encouraging sign for them at the start of a month-long tour, but they will hope it was a blip resulting from a new-look T20 side that will not translate into the ODIs. The presence of captain Misbah-ul-Haq should add some stability, although the absence of Mohammad Hafeez due to injury is a blow. Nothing quite the hole left by Saeed Ajmal, though. In eight ODIs against Australia in the UAE, Ajmal has collected 14 wickets at 18.35 but just as importantly, has gone at only 3.42 an over against them. Australia's batsmen will be far happier against Raza Hasan and Zulfiqar Babar's spin than the mysteries offered up by Ajmal, but their work against spin is still far from ideal.
Meanwhile, Australia will hope that they can carry momentum from the T20 in to the ODIs, albeit with a slightly different line-up. Last time the teams met in the UAE, Australia won 2-1 and they will fancy their chances in this series as well. For George Bailey's men - captain Michael Clarke will miss the series with a hamstring injury - it is also a chance to press World Cup claims. Clarke, Shane Watson and Mitchell Marsh will all be World Cup players, but none, assuming Marsh is not risked, will play in this series. It means every opportunity for the fringe players is a chance not to be wasted.
"In terms of playing it [spin], that's an ongoing challenge for us. That's just something we're continually trying to get better at."
Without Hafeez, Pakistan's top order will need a bit of reworking, while there will also need to be a decision on who keeps wicket. Pakistan are likely to go for a spin-heavy attack after seeing Australia struggle a little against spin in the T20.

Match Stats:
Australia have played only three ODIs in Sharjah since the turn of the century, and have won them all
Misbah-ul-Haq will be playing his 150th one-day international
Australia enter the series ranked 4th in ODIs and could finish it anywhere from 1st to 4th; Pakistan are 6th and will almost certainly stay there regardless of the series result
Teams :