England took wickets regularly to push Australia on back foot

After bundling out England on 430, Australia scored 264 runs at the loss of 5 wickets at stumps on day 2 of first Ashes test in Cardiff. Scoring 95, Chris Rogers was the stand out performer for Australia with the bat.

After bundling out England on 430, Australia scored 264 runs at the loss of 5 wickets at stumps on day 2 of first Ashes test in Cardiff. Scoring 95, Chris Rogers was the stand out performer for Australia with the bat.

England began the day on their overnight score of 343 for seven after Joe Root made well deserved 134 to rescue his team when hosts were reduced to 43 for 3. The conditions today were just perfect for the batters with blue skies on a sunny day, Moeen Ali and Stuart Broad started the day aggressively. England added 87 runs to their overnight score in just 14.1 overs to reach at 430. With the help of 11 boundaries and one six, Moeen Ali scored 77 runs in just 88 balls. Stuart Broad was the first to be dismissed on day 2 after scoring 18 runs. He added an important 52 runs with Ali. Mitchell Starc wrapped up the innings in consecutive overs with Moeen caught at slip, trying one big drive too many, and James Anderson clean bowled for one to finish with five for 114. Starc grabbed 5-wickets haul. 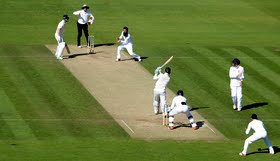 Rogers and David Warner came out to open for Australia and they successfully see off the remaining overs of the morning session. The visitors were 26 for no loss at the time of lunch. But Australia lost key wicket at the start and end of the afternoon session. Anderson found the Warner’s outside edge and it was a very good take by skipper Alastair Cook in the first slip for 17. Steven Smith, the top ranked batsman looked to dominate Moeen and he perished for 33. He found himself in awkward position to play any shot in trying to step out too often. He could only manage to play into the hands of Cook at short mid-on. Australia reached 145 for two at tea with Rogers having reached his half-century from 74 balls. Rogers played some wonderful cover drives throughout his inning. However, he fell five runs short of a test match century as Mark Wood induced him into playing at a delivery angled across him, Jos Butler took the edge behind the stumps.

Anderson came back for a tidy spell which resulted as a wicket for Moeen Ali. Clark tried to step out and hit Ali but he didn’t get the elevation and could only manage to give him a return catch. Just before the close of play, Adam Voges became the third Australian batsman to get himself out in thirties as he drove Ben Stokes straight to Anderson at short cover. Shane Watson (29) safely negotiated the remaining days play with nightwatchman Nathan Lyon (6) and visitors still trail by 166 runs with their five first-inning wickets left. Moeen Ali was the most successful bowler for England on day 2. He claimed the wickets of Smith and Clark. Anderson, Wood and Stokes got one wicket each.

Now, Australia will aim to go closer to England’s total on day 3. But if England will manage to get first inning lead of about 100 runs then they will have a upper hand on this match or if Australia get past the English total the match is on.