The 2015 Cricket World Cup has turned out to be the last international assignment for many prominent cricketers, including some very big names.

The 2015 Cricket World Cup has turned out to be the last international assignment for many prominent cricketers, including some very big names. Some decided to quit only the one-day format. Here's a look.

Kumar Sangakkara: One of the greatest cricketers to grace the game, the Sri Lankan giant bowed out on a high. He scored four hundreds in as many games in the World Cup, and was the second leading run-scorer in the World Cup. He will play on in Tests until the home series against India in August. Michael Clarke: Like Sangakkara, Clarke also announced his retirement from one- day cricket to elongate his Test career. He was injured for the early part of the World Cup, and had a mixed run after comeback, but finished off the tournament on a high with a pleasing 74 in the final at Melbourne. He can now concentrate on the Ashes. 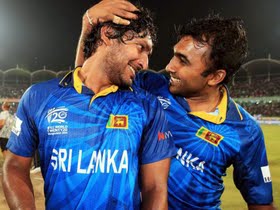 Mahela Jayawardene: The former Sri Lankan skipper had already retired from Tests, so the World Cup was his swansong from all international cricket. Unfortunately, Jayawardene had a highly disappointed tournament. He got a hundred against Afghanistan when his team was in trouble, but otherwise he had a tournament to forget. Perhaps, like so many veterans have done in the past, he carried on for one tournament too many.

Misbah-ul-Haq: The Pakistan skipper has expectedly decided to retire from one- day cricket. While his team struggled, he had a fruitful World Cup scoring runs everytime the team has needed it. Misbah was a late bloomer in international cricket, and although he did not get a one-day century to his name, he will be remembered among the best Pakistan ODI batsmen from the last decade. He can now concentrate on Tests.

Shahid Afridi: The 2015 World Cup also brought to an end the international career of Afridi. His Test career had ended long ago, but he had been an important component of the ODI and T20 squad over the last few years. Sadly, he had an extremely poor World Cup, and hardly made any impact.

Daniel Vettori: This was an expected call. The left-arm spinner had been out of the reckoning for a while due to injury. He was expected to play a limited role in the World Cup, but brought all his experience into play to finish as one of the most impressive bowlers. For nearly 15 years, Vettori carried New Zealand's bowling on his shoulders. And, he leaves with his head held high.

Brad Haddin: While Clarke announced his retirement prior to the final, Haddin waited until he had laid a hand on the trophy to announce his decision. Haddin lost his best years in international cricket since Adam Gilchrist didn't give him much of a chance. Despite coming in late into the national squad, he managed to finish with decent returns. He was surrounded with controversy owing to his unnecessary comments over the Kiwis. Haddin would be least concerned one guesses.

Kyle Mills: Mills leaves cricket just as he played it, pretty much unnoticed. The medium pacer was part of the New Zealand squad for the World Cup, but did not get a single game. Over a decade-long career though he was a constant figure in the one-day side, and ended up with over 200 wickets. An unsung hero for sure.