Chennai Super Kings beat Royal Challengers Bangalore by 24 runs at M. Chidambaram Stadium, Chennai. By this win, CSK have kept their fortress invincible. RCB restricted CSK at 148 but they couldn’t chase that score too and fall short by a healthy margin. 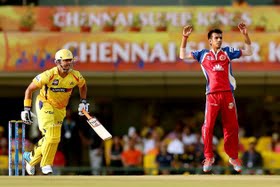 Chasing a below par score of 149, RCB lost their opener Nic Maddinson (4) when he stepped out and missed the straight full toss from Ishwar Pandey. AB de Villiers came and played some good shots but couldn’t carry his inning forward and was caught by du Plessis at mid-off. Last game hero for RCB, Mandeep Singh perished without even facing any ball. Then skipper Virat Kohli and Dinesh Karthik put a stand of 63 runs and led the fight back.

The match was looking inclined towards Royal Challengers Bangalore when Virat Kohli and Dinesh Karthik were in the middle then Dwayne Bravo brilliance in the field turned the game other way. Virat Kohli stepped down and charged the ball straight to the bowler Bravo and by the time Kohli realized that he was away from his crease, Bravo had shattered his stumps with the direct throw. From then RCB were not able to recover and kept losing their wicket by some very ordinary shot. Dinesh Karthik also followed Virat Kohli and hit the bouncer from Ashish Nehra straight to the deep square leg to Dwayne Smith. RCB lost their last seven wickets for just 27 runs.

Earlier, Chennai Super Kings won the toss and elected to bat first. But it was not the ideal start of the CSK as Dwayne Smith was bowled on the last ball of the first over. Smith not looked settled against Mitchell Starc and was not able to even touch the first five balls. The pitch was on the slower side so the batsmen struggled to play their shots freely. McCullum(20) got the start but couldn’t capitalize on that. On the other hand, Suresh Raina(52) was playing and carrying the ship of Chennai cautiously. He curbed his natural instinct to play much matured inning. At a time, CSK were reduced to 101/4 in 15 overs then MS Dhoni played a little cameo to give his side much needed momentum going into the later stage of the inning. Pawan Negi also followed Dhoni and struck a crucial boundary to make sure CSK reaches to a respectable total.

24 runs victory was considerably a good margin in a low scoring match and CSK gained a huge boost to their net run rate. Courtesy of this win, CSK are on top of the table.