Galle produced one of the dullest contests in the history of cricket with as many as eight centuries scored on a flat lifeless pitch. The opening Test here between Sri Lanka and Bangladesh as expected petered out in a draw as the bowlers struggled to take wickets to cause any excitement on the final day.

Galle produced one of the dullest contests in the history of cricket with as many as eight centuries scored on a flat lifeless pitch. The opening Test here between Sri Lanka and Bangladesh as expected petered out in a draw as the bowlers struggled to take wickets to cause any excitement on the final day.

The match was all about individuals helping themselves to their milestones. The final day saw Tillakaratne Dilshan and Kumar Sangakkara scoring hundreds. All in all, as many as eight centuries were scored in this match which equals the previous world record in Test Cricket. As far as the Sri Lankans were concerned, for the 36-year-old Dilshan, it was a 16th Test hundred and for the 35-year-old Sangakkara, it was a 32nd hundred. For the southpaw, it was the second hundred of the match. Both the batsmen got dismissed though to rank long hops from off-spinner Mahmudullah. First to go was Sangakkara after scoring 105 from 172 balls with 10 fours. Dilshan finished with 126 from 190 balls with 9 fours. 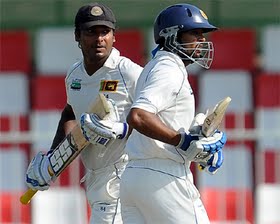 After the Dilshan-Sanga stand, opportunity came to debutant left-hander Kithuruwan Vithanage to play his first Test innings. The 22-year-old confidently scored 59 from 70 balls with 7 fours and a six before dragging a forcing shot off Mahmudullah onto his stumps. The youngster batted with freedom and was not afraid of playing the adventurous reverse sweeps at will. Sri Lanka’s Skipper Angelo Mathews collected 38* before declaring his team’s second innings at 335 for 4 in 83 overs. Bangladesh in their bowling efforts lost Sohag Gazi to a hamstring injury, the bowler who rolled his arm relentlessly for 50 overs in the first innings!

With Mathews declaring just before Tea, Bangladesh were left with an improbable target of 268 in 37 overs. A nervous Anamul Haque fell early edging a backfoot defence off the pacy Shaminda Eranga onto his stumps in the 2nd over to trigger some panic in the dressing room. There was no drama after that as Jahurul Islam (41 from 73 balls with 5 fours and a six) and Mohammad Ashraful (22 from 56 balls) batted out the remainder of the match to secure a draw with the Tigers at 70 for 1 in 22 overs. The Man of the Match award was given to Bangladesh’s Captain Mushfiqur Rahim for his maiden double ton.