After clinching the five-match T20I series 5-0, Team India have had a horrendous time of it on the tour of New Zealand. They lost the three-match ODI series 0-3,

After clinching the five-match T20I series 5-0, Team India have had a horrendous time of it on the tour of New Zealand. They lost the three-match ODI series 0-3, and now are 0-1 down in the two-match Test series.

Indian batsman was completely at sea against the swing and seam bowling of New Zealand pacers, especially Trent Boult and Tim Southee, managing only 165 and 191 in the two innings. Only Ishant Sharma with a five-wicket haul and opener Mayank Agarwal with 34 and 58 managed to stand up to the Kiwi challenge.

The Indian bowlers also disappointed, allowing the hosts to recover from 225 for 7 to post an imposing 348. Jasprit Bumrah had yet another poor encounter, and while Ravichandran Ashwin claimed three wickets, he was totally out of sorts with the bat.

Former India batsman Dilip Vengsarkar is of the view that Indian batsmen are not showing enough positive intent. Pointing out to Cheteshwar Pujara's slow batting, Vengsarkar said in a Hindustan Times report, “He has scored a lot of runs, but he has to be able to rotate the strike, otherwise his batting partner will be in trouble as he will lose the rhythm being stranded at the other end for long periods. 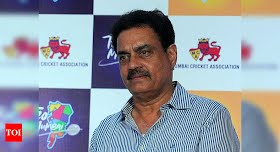 Pujara can’t get bogged down. Also, Ajinkya Rahane was not able to convert his starts." In India’s second innings, Pujara occupied the crease for 81 balls but got only 11 runs. Further, Hanuma Vihari struggled for his 15 from 79.

There will be more pace trouble for India at Christchurch as left-arm seamer Neil Wagner, who missed the first Test due to the birth of his child, is all set to return. There are great chances that New Zealand will go in with a four-pronged pace attack in Christchurch.

Vengsarkar advised the Indian batsmen to leave the short ball or duck as the rising delivery caused a lot of trouble to the Indians in the first Test. “You are never in control of the hook shot,” he explained.

Vengsarkar was disappointed with India's short-ball tactics to the Kiwi tail in the first innings. “We allowed the game to get away after having New Zealand at 225/7 by bowling short. New Zealand, Australia or England batsmen are not going to get out on our short bowling. They are used to it. Their lower-order got the runs and took the score to 348," Vengsarkar added.