India coach Ravi Shastri lauded the boys after the visitors thrashed South Africa 5-1 in the six-match ODI series. The win was all the more significant

India coach Ravi Shastri lauded the boys after the visitors thrashed South Africa 5-1 in the six-match ODI series. The win was all the more significant after India again struggled in the Tests.

"You spoke of intensity, where does the intensity come from? When you have a leader like that who leads by example, the other guys jolly well follow. Otherwise they know what to expect,” said Shastri at the post-match conference. 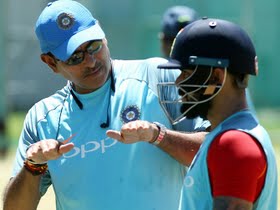 "Even after being two-zip down in the Test series, for them to show that kind of character to come back and win that Test match in Johannesburg on a spiteful pitch. And to then take that momentum into the one-day series and show the consistency they've shown over the last two weeks is fabulous,” Shastri said in further praise of the team.

The success of spinners Kuldeep Yadav and Yuzvendra Chahal was one of the key reasons behind India's impressive efforts. Agreeing with it, Shastri said, "I think even in my last stint, Virat and me have always discussed that we need wickets in the middle overs.”

Chahal and Yadav combined to pick up 33 wickets between them in the series.