India squandered a great opportunity to take control of the Christchurch Test after stumbling to 90 for six in their second innings. This was after the bowlers had done a commendable

India squandered a great opportunity to take control of the Christchurch Test after stumbling to 90 for six in their second innings. This was after the bowlers had done a commendable job to bowl out New Zealand for 235 and eke out a slender seven-run first-innings lead.

Mohammed Shami and Jasprit Bumrah took seven wickets between themselves to restrict the Kiwis. The hosts at one stage were 153 for 7, but the lower order again contributed to frustrate India and lift New Zealand’s spirits. Kyle Jamieson (49), Colin de Grandhomme (26) and Neil Wagner (21) ensured India did not gain any significant first-innings advantage. New Zealand could have gone past India’s total had Ravindra Jadeja not plucked a one-handed stunner to send back Wagner. 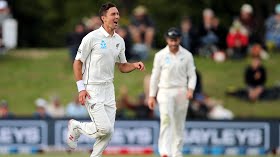 Trent Boult then put the Kiwis right back on top of the Test with figures of 3 for 12. He dismissed Mayank Agarwal (3), Cheteshwar Pujara (24) and nightwatchman Umesh Yadav (1) as India lost all the momentum they had gained. De Grandhomme got the big scalp of Virat Kohli (14), trapping him in front of the stumps while Tim Southee and Wagner accounted for Prithvi Shaw (14) and Ajinkya Rahane (9) respectively.

India head into Day 3 with a lead of 97, but with only four wickets in hand. Despite another no-show by the Indian batsmen, pace spearhead Jasprit Bumrah refused to play the blame game and backed his team to try and find a way out of the near-hopeless situation.

“See we don’t play the blame game. In our culture, we don’t look at blaming anyone. Some days if as a bowling unit we don’t pick up wickets, then that doesn’t give the batsmen liberty to take our case, isn’t it?” explained Bumrah, while speaking after the day’s play.

Bumrah said the obvious plan now is for Rishabh Pant and Hanuma Vihari to try and score as many as possible on Day 3 so that the bowlers have something to bowl at. “We, as a team, want to push it hard and do well but the situation is what it is. We have two batsmen left and we would look to push tomorrow as well. We can try and work hard and score as many as we can and we will see how it goes,” added Bumrah, who was back among the wickets with three scalps in New Zealand’s first innings

“We, as a unit, are very close and we are working hard. We lost more wickets than we wanted to but we don’t play the blame game and we try to keep everyone together,” he added.

As many as 16 wickets fell on Day 2 of the Test. On why the bowlers of both sides tasted plenty of success, Bumrah opined, “On the first day, there was a bit of moisture and because of that when they bowled in the first innings, dents were created. There was a bit of seam movement for both the teams and bowlers were there in the game and you bowl good areas, you create good pressure. We were also creating a lot of chances and that could have played a role.”