Pune Warriors have acquired the services of the 27-year-old Luke Wright for next month’s IPL-5. Luke Wright is an exciting hitter of the cricket ball while doubling up as a decent fast medium bowler. Wright despite having the special talent hasn’t gone onto become a successful cricketer at the international level. 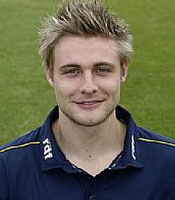 So far Luke Wright has played in 46 ODIs and 30 T20Is for England ever since making his international debut in 2007. It has been a modest performance from Wright till date in his international career. But Wright remains to be one of the most destructive players on his day. Just a couple of months back, Wright went onto score a smashing 117 in 60 balls with as many as 9 sixes for the Melbourne Stars in the KFC Big Bash League.