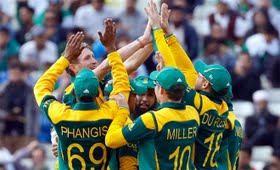 Pitch report : Before the Twenty20 matches in the UAE started, Pakistan had won their previous five matches and South Africa's recent record in the shortest format was patchy. Take a look at the form guide below and you will see how that has changed over the last 10 days.

Pakistan are now on a losing streak that Mohammad Hafeez lamented they can't seem to break because "the luck is just not with us". Fortune abandoned the team - and Wednesday night's rain was another example of it - just as consistency has attached itself to South Africa.
Faf du Plessis' men seem to have made much-needed strides in a format they were guilty of treating a little too lightly in the past. With role definition evident in the batting line-up and all their frontline bowlers firing, all they would want from their last T20 of the year is to continue on the path they are on now.
Pakistan will play Sri Lanka in this format later in the year but they would still value an opportunity to get one over South Africa, especially because they have been under the pump for most of the past month. They showed signs of being able to match the opposition toe to toe in Johannesburg and will hope to pick that up in Cape Town, before the ODI series starts.
Henry Davids has been released from the squad to play first-class cricket for his franchise which means South Africa have settled on Hashim Amla and Quinton de Kock to open. AB de Villiers may come back from being rested in the previous match while David Miller or Wayne Parnell could make way for David Wiese, the allrounder who has not played so far. If Ryan McLaren returns, South Arica could have five seamers at their disposal and will have to make a choice between Imran Tahir and Aaron Phangiso for the spinners' role.
Ball by ball updates
Full Scorecard
Last Five Match Result :
Pakistan LLLWW (Last five completed games, most recent first)
South Africa WWWLW
Match Stats :Apart from the 2007 World T20, Newlands has only hosted one other international T20, played between Australia and South Africa in the 2011-12 season. Pakistan played two matches at the ground in the inaugural T20 event and won both, beating Bangladesh and New Zealand
Teams:
South Africa team: AB de Villiers, M Morkel, DW Steyn, HM Amla, JP Duminy, LL Tsotsobe, WD Parnell, R McLaren, H Davids, DA Miller, AM Phangiso, Faf du Plessis, Imran Tahir, Quinton de Kock, David Wiese
Pakistan team: MohammadHafeez, MisbahulHaq, ShoaibMalik, SohailTanvir, ShahidAfridi, NasirJamshed,SaeedAjmal, AbdulRazzaq, AbdurRehman, UmarAmin, AhmedShehzad, UmarAkmal, AsadShafiq, Junaid Khan, Anwar Ali, Bilawal Bhatti, Sohaib Maqsood