Pacers Alzarri Joseph (4/16) and Jason Holder (3/12) came up with excellent bowling performances as West Indies defeated Zimbabwe by 31 runs in match number eight of the T20 World Cup 2022 at the Bellerive Oval in Hobart on Wednesday, October 19.

Batting first after winning the toss, West Indies put up a disappointing 153 for 7 on the board. Johnson Charles top scored for the batting side with 45 off 36 balls, striking three fours and two sixes. He looked good for a lot more. However, his innings was cut short following a mix-up with Rovman Powell, which saw him being run out.

Kyle Mayers (13) fell to Blessing Muzarabani after hitting a couple of boundaries, while Evin Lewis (15) was caught off Sikandar Raza, failing to made good use of a poor delivery. West Indies skipper Nicholas Pooran also perished cheaply, giving a return catch to Sean Williams. Raza then struck twice in one over. He trapped Shamarh Brooks lbw for a duck before Holder chipped a return catch to the bowler. Raza finished with impressive figures of 3 for 19, but crucial knocks from Powell (28) and Akeal Hosein (23 not out) ensured West Indies went past 150. 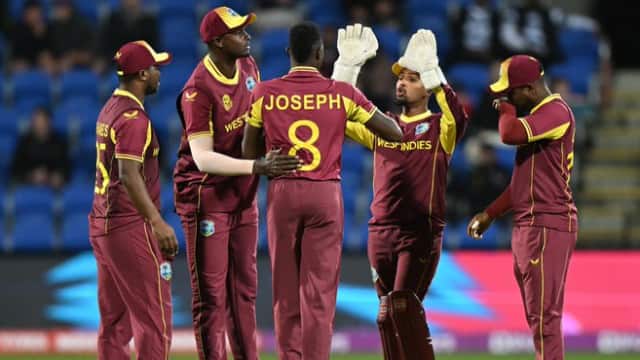 Zimbabwe’s openers added 29 in quick time in the chase. However, Joseph struck soon as Regis Chakabva was bowled for 13. He also dismissed Tony Munyonga for 2 while Obed McCoy got the better of Sean Williams for 1. Wesley Madhevere was looking good, but he perished to Holder for 27. The biggest blow was struck by Odea Smith, who had dangerman Sikandar Raza caught for 14.

At 64 for 5, West Indies were firm favorites to win. Luke Jongwe (29 off 22) gave Zimbabwe slight hope. But Joseph cleaned him up with a brilliant yorker. The pacer and Holder combined to knock over the lower-order.

Reflecting on the win, Windies skipper Pooran said, “Akeal and Rovman putting on that partnership at the end was vital. The energy with the ball after those first two overs. But definitely we created and made our own luck. Jason is the most experienced bowler we have here and we expect a lot from him game after game, Alzarri as well, not only this year but since he returned to the T20 side, he's our best bowler and leader of our attack.”

Speaking about the defeat, Zimbabwe captain Chakabva said they were happy to restrict Windies to 150. He added, “We went in with confidence that we'll get there. Probably lost one wicket too many in the first 10 overs. Credit to WI and Joseph who opened up the gates.”