Bangladesh are bound to improve by playing more Tests

After the highs of Galle, Bangladesh disappointed at Colombo, losing the Test by seven wickets as the Sri Lankans got home to a hard-fought series win. A lot was expected of the visitors after thedefiant manner in which they fought at Galle to keep Sri Lanka to a draw.

After the highs of Galle, Bangladesh disappointed at Colombo, losing the Test by seven wickets as the Sri Lankans got home to a hard-fought series win. A lot was expected of the visitors after thedefiant manner in which they fought at Galle to keep Sri Lanka to a draw. But a more responsive pitch to bowlers coupled by an excellent bowling performance by the hosts in the second Test brought Bangladesh’s weaknesses to the fore. Being a team from the sub-continent, they shouldn’t be struggling against spin, but the quality of the opposition made the difference in the end.

While Bangladesh negotiated the threat of Rangana Herath at Galle, they failed to do the same by some margin at Colombo. In the first innings, the left-arm spinner was aided by opening strikes by Nuwan Kulasekara and Shaminda Eranga. Once the openers were back in the hut, Herath almost single-handedly ranthrough the Bangladesh middle and lower-order before Kulasekara returned to clean up the tail. Herath was even more dangerous in the second innings as he picked up as many as seven wickets to dismiss Bangladesh cheaply a second time, to set up Lanka’s series win. 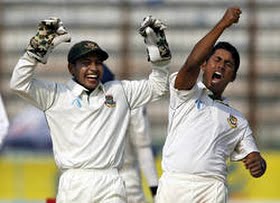 The fact that Bangladesh don’t play a lot of Test cricket was possiblyresponsible for Bangladesh’s failings in the second Test. In the five-day game, you need to experience different conditions at varied venues. This is where Bangladesh were found out. When the pitch at Galle did precious little for the bowlers, most of the Bangladesh batsmen found the going easy and piled up big scores. However, these same very men struggled when the surface started doing some tricks as Herath exploited their weaknesses. The only way Bangladesh can gain consistency is if they play more and more Test cricket in the times to come.

In spite of the series loss, there were some pleasant gains for the visitors. Skipper Mushfiqur Rahim became the first batsman from his country to register a double hundred in Test cricket at Galle. Mohammad Ashraful also rescued his career with a brilliant 190 in the same Test. Further, Nasir Hossain gave proof of his talent by slamming an impressive century batting at number seven. Overall, it was an excellent batting performance by the Bangladesh team, as a result of which they ended up registering their highest Test score thus far.

As for the hosts Sri Lanka, apart from Herath’s performance they had their usual positives as their batsmen raked up big scores. Kumar Sangakkara registered three hundreds and a fifty in the four innings. Tillakaratne Dilshan notched up one century and two fifties, Dinesh Chandimal also helped himself to two tons while Lahiru Thirimanne came up with one big hundred. Sri Lanka thus maintained their superiority at home with another run-filled batting display. If anything they would have wanted their bowlers to do better at Galle irrespective of the conditions. Nonetheless, a series win is a victory in itself.