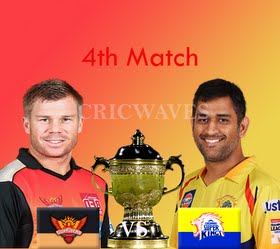 Recent Matches results
Chennai Super Kings: W L W W W
Sunrisers Hyderabad: L L L W L
Pitch report: Chidambaram Stadium Chennai, some of the experts told it is close friend to both pace and spin bowling, so no problem for both teams.
Preview:unrisers' most prolific batsman last year - David Warner - was also the tournament's fourth-highest run-scorer. The difference this time is the captaincy pressure he will be under to brighten the fortunes of his team. An average of 36 against Super Kings and a high score of 135 not out, even if it was for New South Wales, should cheer him up. While conceding 17 runs against Daredevils in the last over, Dwayne Bravo was seen delivering one poor ball after another. He was their most expensive bowler and scored only 1 when Super Kings needed him to accelerate in the last five overs. Talking of form, he did not play in the World Cup and has struggled with the bat this year in domestic matches.
Match Stats:
MS Dhoni averages 204 against Sunrisers. He has been dismissed only once in five innings and has scores of 57*, 13*, 63*, 4, 67* against them at a strike-rate of 179
Dhoni has scored 103 runs off 56 deliveries against Dale Steyn in the IPL and has been dismissed twice by him Super Kings' win by one run on Thursday gave them their 70th win - the most by any side in the IPL
Sunrisers are the only team whose batsmen have not hit a century in the IPL and are also the only team yet to see a fifty from their captain
Teams : Chennai Super Kings team: MEK Hussey, MS Dhoni, BB McCullum, SK Raina, RA Jadeja, DR Smith, R Ashwin, M Manhas, A Nehra, S Badree, Rahul Sharma, I Pandey, Faf du Plessis, Pawan Negi, Baba Aparajith,Kyle Abbott, Ronit More, MM Sharma, Matt Henry
Sunrisers Hyderabad team: I Sharma, PS Kumar, KP Pietersen, DW Steyn, RS Bopara, LR Shukla, S Dhawan, NV Ojha, B Kumar, DA Warner, TA Boult, MC Henriques, Karn Sharma, EJG Morgan, Ashish Reddy,KS Williamson, Parvez Rasool, Hanuma Vihari, Lokesh Rahul, Ricky Bhui, Chama Milind