Delhi Capitals had an impressive run last year, making it to the play-offs for the first time in seven years. They looked a much more confident unit under the young Shreyas Iyer. If you look at their batting line-up, they indeed have some genuine match-winners. Shikhar Dhawan, Prithvi Shaw, skipper Iyer, and Rishabh Pant make for a formidable top four. 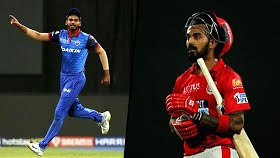 Further, they have some solid foreign talent as well in Shimron Hetmyer, Marcus Stoinis, Alex Carey, each of whom can be a match-winner with the bat on a given day. In the bowling department, South African pacer Kagiso Rabada will be the key again with his pace and wicket-taking skills. Ishant Sharma and Amit Mishra have done reasonably well using their experience while new DC recruit, veteran offie Ravichandran Ashwin, will be expected to make good use of the conditions in the UAE.

Speaking of explosive talent, there is no dearth of the same in the Kings XI Punjab. Captain KL Rahul and the maverick Chris Gayle are highly aggressive performers at the top. KXIP have also brought back Glenn Maxwell, who was sensational the last time the event was held in the Middle East. Nicholas Pooran, Mayank Agarwal and Sarfaraz Khan are other names to watch out for.

With spin expected to play a big part in the UAE, Punjab will have high hopes from Mujeeb-Ur-Rahman. They also have the young and talented Ravi Bishnoi in their ranks. Among the pacers, Mohammed Shami should be a certainty in the playing eleven. Further, Ishan Porel, Sheldon Cottrell or all-rounder Chris Jordan, who is also a death-overs specialist, could get a look in.

KXIP and DC have met each other 24 times in the IPL. Punjab have a slightly better record, winning 14 while Delhi have won 10.

The pitch at the Dubai International Stadium is somewhat batsmen-friendly. The boundaries are on the shorter side. As the game progresses, the surface will get slow, bringing in the spinners. With dew around, the team batting second could have an advantage.

Weather conditions Weather at Dubai on Saturday will be bright and sunny, around 38 degree Celsius. Humidity will be in the region of 48 per cent.