Canberra ODI preview: India must go on all-out attack with the bat

Three matches down the line, this is not where India expected to be. But, the 3-0 scoreline after Perth, Brisbane and Melbourne is a fair reflection of the gulf that exists between the two teams, at least under the given conditions.

Three matches down the line, this is not where India expected to be. But, the 3-0 scoreline after Perth, Brisbane and Melbourne is a fair reflection of the gulf that exists between the two teams, at least under the given conditions. In all three games, India have batted first and have scored at a run rate of either close to over six. That is quite an impressive stat. In spite of achieving the same, they have failed to come anywhere close to victory, which is a clear indication of how badly their bowling is struggling. With the series gone, there isn't much pressure on India now. They must now look to reintegrate.

One stern lesson that India must learn from the hat-trick of defeats is that there is no point in building an innings and playing the traditional sort of one-day cricket at Canberra. They have thrice tried the opinion in a row and despite having a batsman who has scored a hundred in each match, they have failed to achieved the desired result. The batsmen must thus look to go on an all-out attack against the Aussies whether they are batting first or chasing. If that means playing some rash cricket so be it. They must open up, and take on the Aussies. Who knows, if the move comes off, they may be able to post 350. Else, a defeat, be it by 10 wickets or 200 runs doesn't really make a difference.

For India to have their best chance of winning at Canberra, they will need their in-form batsmen to blaze away. Rohit Sharma and Virat Kohli will be the key. Both have looked in complete control during the course of the series against a decent Australian attack. But, as mentioned above, given the weak Indian bowling attack, they aren't batting quickly enough. Kohli and Rohit must turn the clock back to a few seasons in India where both sides consistently posted 350, but India had the final laugh. It obviously won't be as easy in Australia, but India are left with no other option.

Batting with an uncluttered mind might just prove to be a blessing in disguise for the struggling Shikhar Dhawan. Of course, he could play a bad stroke and fall early, but it wouldn't make much of a difference as India have become accustomed to losing him early. On the contrary, if his attacking game comes off, India could put the Aussie bowlers under pressure. India will be aware that they lack big hitters, so swift and big runs from the top order will be paramount. Their batting is not in that bad shape after all, with Ajinkya Rahane among the runs, and skipper MS Dhoni also striking some form in the last game. 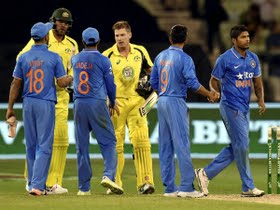 There is not much in the form of experimentation that can be done with the bowling attack. But, with the series gone, India will do well to retain last-match debutants Gurkeerat Singh Mann and Rishi Dhawan. Barinder Sran hasn't been able to repeat the magic of his debut show so he could make way for Bhuvneshwar Kumar, who himself is struggling. Ravichandran Ashwin may join Ravindra Jadeja back as a bowling option with Umesh Yadav and Ishant Sharma failing to offer much. The fans will not expect much from Team India. Dhoni and co still must try to play to the best of their ability though it may not be enough.