IPL 8 MI vs SRH match report: Mumbai Indians crushed Sunrisers Hyderabad by 20 runs in order to turn their things around in Indian Premier League at Wankhede Stadium in Mumbai.

Mumbai Indians crushed Sunrisers Hyderabad by 20 runs in order to turn their things around in Indian Premier League at Wankhede Stadium in Mumbai. The target of just 158 runs proved to be too much for Sunriser as they never looked in command once their opener got out.

Chasing a par score of 158, Shikhar Dhawan(14) and David Warner(9) went all guns blazing. Dhawan punished his country mate Harbhajan Singh for 18 runs in the third over which included three four and a six over mid-wicket. But once Warner was dismisshed in the fifth over, Sunrisers lost their track. 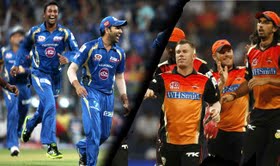 The timing of Shikhar Dhawan along with his ability to find the gap when he is in full flow was to see for everyone but he too perished in the next over. Lokesh Rahul and Ravi Bopara stayed rooted at the crease but not managed keep the required rate in control. They not even managed to score even a run per ball. The lack of fire power in the middle overs costed Sunriser the match.

Sunrisers were clueless against Mitchell McClenaghan(3-20) and Lasith Malinga(4-23). Hanuma Vihari did played late flourish but it was too late for them. They didn’t have anyone in the middle order who can accelerate the scoring and they missed the fire power of Eoin Morgan.

Earlier, Mumbai Indian’s skipper Rohit Sharma won the toss and elected to bat first. Lendl Simmons and Parthiv Patel started the innings cautiously and took calculated risk in between. Prising out Parthiv Patel, Dale Steyn provided the first break through for the Hyderabad.

Youngster Unmukt Chand again failed to make any impression and got out for just 5 runs. Skipper Rohit Sharma and Simmons curved a partnership of 51 runs together. Simmons(51) helped Mumbai to gain some momentum but he was snared by Steyn soon.

Rohit Sharma misread the line of Karn Sharma and holded out at long- off by Bhubneshwar. Kireon Pollard(33) too played a little cameo but loosing wickets at regular interval, Mumbai were not able to impose a big target on Hyderabad.

Bhubneshwar Kumar(3-26) was the pick of the bowlers for the Sunrisers Hyderabad whereas Dale Steyn and Praveen Kumar also chipped in with two wickets each.

It was very rare site to see in IPL that no any batsman from either team was able to hit more than one six. In spite of wining today, Mumbai Indian’s are at the bottom and with only two wins in six of their games, Sunrisers Hyderabad are at the fourth spot of the points table.

Player of the Match: Lasith Malinga