Mohinder Amarnath: The man who took on the feared West Indies four-pronged attack

Cricket had never seen its like before. In 1983 the West Indies pace quartet was probably at the pinnacle of its world domination. Few hoped to survive against them, and fewer still had the audacity to confront them head-on and fight fire with fire.

Cricket had never seen its like before. In 1983 the West Indies pace quartet was probably at the pinnacle of its world domination. Few hoped to survive against them, and fewer still had the audacity to confront them head-on and fight fire with fire. The thought of facing Andy Roberts, Michael Holding, Malcolm Marshall and Joel Garner filled otherwise competent batsmen with dread, and quite a few, it is said, were forced from the firing line by the sudden onset of previously unreported illnesses or injuries.

And before such players are scoffed at or ridiculed, it should be considered that the West Indian speed merchants posed serious, sometimes life-altering threats to those at the other end. The instances are countless. In 1976, for example, the plucky Brian Close, recalled at age 45 to face the Caribbean pace battery, was battered and bruised all over (He had the marks to prove it) by a frightening short-pitched assault by Holding, Roberts, and Wayne Daniel that caused many to cringe. 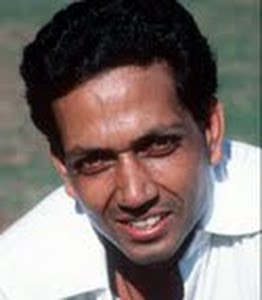 More consequential was the curtailment of England opener Andy Lloyd’s test match batting career to just 33 minutes in 1984. Struck on the right temple by a screaming Malcolm Marshall bouncer, Lloyd was out like a light as he fell motionless on the pitch. Hospitalized for several days, he never played cricket again until 1985, and left with permanent vision impairment, he never regained the form that would warrant a test recall. Not only could they take your wicket, you could also be maimed in the process.

Mohinder Amarnath suffered more than his fair share of pain from fast bowlers. He was perceived to have a weakness against the short ball, and the many times he was floored by bouncers gave some credence to this perception. Richard Hadlee, Rodney Hogg, Imran Khan, and even hardly known Australian pacer, Sam Gannon, were just some of the bowlers who counted hits on the Indian batsman.

Yet, despite his problems with short-pitched bowling he never took a backward step. You could question his technique against hot pace, but there was no doubting his courage. In 1976 on a terrifying Sabina Park strip, that famous game when India’s second innings closed on 97 with five batsmen absent hurt, Amarnath’s made an unbelievable 60 with 7 fours and 3 sixes. Captain Bishen Bedi had declared with the first innings at 306/6, out of fear ofinjury to his bowlers, having had three batsmen already hospitalized. Reporting on the game, doyen West Indian cricket journalist Tony Cozier wrote,

Holding especially was a frightening proposition, bowling at great pace and persistently threatening the batsman’s life and limb with disconcerting lift. He removed Mohinder Amarnath (for 39 in the first innings) off his fifth delivery with the second new ball. It flew from no more than three yards in front of the batsman, straight at his throat.

To have put on such a display in the second innings is a good indication of his fearlessness.

It was a career of peaks and valleys for Amarnath. Shortly before the 1982/83 West Indies tour he made his fourth comeback to the Indian team. He had sought the counsel of his famed father, the legendary Lala Amarnath, and the consultation resulted in a noticeable change in technique. To counter his inadequacy against the short ball he adopting a “two-eyed” stance that saw him facing the bowler more square-on and enabled him to get into position more quickly for his beloved hook shot.

The new approach reaped immediate dividends. In six tests against Pakistan he amassed 584 runs at 73 with three hundreds and three half-centuries. It was then on to the West Indies to face the lion in its den.

Batting at number three he made 29 and 40 at Sabina Park, and saw his side go down to an unexpected and heartbreaking defeat in the last over of the match.

The second test at the Queens Park Oval was drawn and Amarnath’s 58 and 117 were top-scores in either innings, earning him the man-of-the-match award.

Rain allowed just over 221 overs at Bourda in Guyana and Amarnath only made 13 before he was caught by Viv Richards off Marshall in his only turn at the crease.

West Indies won easily on the Caribbean’s quickest surface at the Kensington Oval, Barbados. But the hosts had to contend with a pugnacious Mohinder Amarnath. He made a blistering 91 out of India’s 209 in the first innings, striking 6 fours and 3 sixes. Always willing to hook, he was never slow to drive off the front foot whenever the bowlers pitched up.

There was drama aplenty in India’s second innings. Amarnath had to retire hurt on 18 after being struck a fearful blow on the chin by Marshall. The score was then 91/1 and the batsman had to be transported to the hospital where he received six stitches. He then returned to the dressing room, washed the bloodstains from his shirt, and rejoined the action at the fall of the fifth wicket with the score on 135. Greeted immediately with a bouncer from Holding, he hooked it almost off the tip of his nose for 6. Or so the legend goes (The records show only 12 fours in his second innings knock). He went on to make 80, and was hooking till the end.

The teams then travelled to the Antigua Recreation Ground where he gave another sterling display, making 54 in the first innings and signing off with a majestic 116. He left the Caribbean with 594 runs at 66.44 with two hundreds and 4 half-centuries.

Later that year in England, Amarnath was instrumental in India winning the World Cup, earning man-of-the-match awards in the semi-finals and finals. He still had to endure further peaks and valleys in his career and understandably he (and many others who thought he was treated unfairly) didn’t see eye to eye with the selectors. And remembering what he did to the most fearsome bowling attack of the time –maybe of all time –who could blame them?

Nobody in the era of the four-pronged attack had gone to the Caribbean and played in such a forthright manner. West Indian fans were used to seeing opposing batsmen duck and cower in the face the usual searing onslaught; Amarnath stood tall with his lucky red rag in his back pocket and hooked -- never intimidated and never backing down. It was a performance that earned him the respect of every cricket fan in the West Indies.