The Selectors have axed Tim Bresnan, Eoin Morgan and Samit Patel from the Test team that played in India prior to Christmas. Bresnan is not exactly dropped and is omitted because of an elbow problem which will be assessed under the supervision of the ECB. England had an 18-man squad for India tour which has been cut to 15 for the New Zealand tour, so the only addition to the squad was the inclusion of the pace bowling all-rounder Chris Woakes from Warwickshire who has played in 7 ODIs and 3 T20Is. 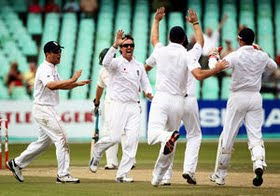 In the ODI Squad, Wicket Keeper Craig Kieswetter has been axed following a poor run with the bat in India. James Harris, the 22-year-old pacer all-rounder from Glamorgan has received his maiden call in the England ODI squad. The English ODI Squad surprisingly doesn’t have Kevin Pietersen, the reason could be the ECB keen on resting him for the upcoming Test Series. Jonathan Trott who is not part of the squad in India along with Stuart Broad is in the team for the New Zealand ODIs. James Anderson and Jonny Bairstow also return to the ODI Squad after missing the ongoing India Series.

According to the ECB official website, National Selector Geoff Miller has been quoted to have said: "This series against New Zealand provides an opportunity for the squad to build on the form they showed against India as we start an important 12 months of Test match cricket.

"With Tim Bresnan currently unavailable while his elbow is assessed there is a good opportunity for Chris Woakes to gain further experience in the international environment. We have a busy international summer ahead of us and the medical team felt this was an ideal opportunity for Bresnan to take some time out to ensure his elbow is functioning effectively. Woakes has impressed on the England Performance Programme and with England Lions and Warwickshire in recent years as well as with England in the limited-overs formats.

"Craig Kieswetter has had an extended opportunity in ODI and T20 cricket. He has shown evidence of delivering performances on the international stage; however we don't feel these have been delivered consistently enough. As we look forward to the ICC Champions Trophy and ICC Cricket World Cup in 2015 we will look to explore other options. The door is not closed to Craig, and he can fight his way back into contention for international selection through consistent high performances with Somerset.

"Joe Root has been named in the one-day squad which will provide him with an opportunity to experience international limited-overs cricket in different conditions as we continue our planning for the ICC Champions Trophy. James Harris has worked hard with the England Performance Programme this winter and has been named in an England ODI squad for the first time."