Glenn Maxwell (108) and Alex Carey (106) hit brilliant tons, and featured in a 212-run stand for the sixth wicket, as Australia recovered from 73/5 to chase down 303, and win the three-match series 2-1. This was England’s first ODI series loss at home since September 2015. Aussies were the opponents back then as well.

Even as Australia were under pressure in the massive chase, Carey and Maxwell remained positive, and took on the England bowlers. Maxwell smacked seven sixes in his 108 while Carey was more subdued with two. 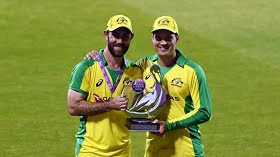 Carey could have been dismissed for 9 when he was caught at third-man. However, replays showed that Jofra Archer overstepped. The wicket-keeper batsman survived and went on to complete his maiden one-day hundred.

Although Maxwell and Carey fell in the 48th and 49th overs respectively, Mitchell Starc hit a six and a four off Adil Rashid in the last over to take the Aussies home with two balls to spare.

The victory looked like a distant dream for Australia after Chris Woakes sent back Aaron Finch and Marcus Stoinis for 12 and 4 respectively. Joe Root then proved to be the surprise hero with the ball, sending back David Warner and Mitchell Marsh. Marnus Labuschagne’s run out by Sam Billings for 20 left Australia reeling at 73 for 5 before Maxwell and Carey mounted the fightback.

Earlier in the day, Australia got off to the best possible start as Starc sent back Jason Roy and Joe Root off the first two balls of the match. Even as Eoin Morgan (23) and Jos Buttler (8) failed to get going, Jonny Bairstow kept England in the hunt from one end.

Sam Billings gave Bairstow support as the duo added 114 before Billings top-edged a reverse-sweep on 57. Bairstow fell after an impressive 112 from 126 balls. Woakes’ unbeaten 53 from 39 balls took England past the 300 mark. In the end, it did not prove enough as Maxwell and Carey took on the England bowlers with ease.