Under pressure after defeat, Rohit Sharma hints at bowling changes for Rajkot T20I

India captain Rohit Sharma, while speaking to the media ahead of the second T20 at Rajkot on Thursday, hinted that India might go in for some changes

India captain Rohit Sharma, while speaking to the media ahead of the second T20 at Rajkot on Thursday, hinted that India might go in for some changes in the bowling department, which failed to defend a total of 148 against Bangladesh, in the first T20 at Delhi.

Having posted 148 for 6 batting first, India was in the game with 22 needed off the last two overs. However, Mushfiqur Rahim smashed Khaleel Ahmed for four consecutive boundaries to turn the game around.

There is a chance of Shardul Thakur coming in for Ahmed at Rajkot. While Rohit did not make it obvious, he stated, “The combination we played in the last game was based on the pitch that was on offer in Delhi. We will see the pitch again and will think about what we need to do in our bowling line-up.” 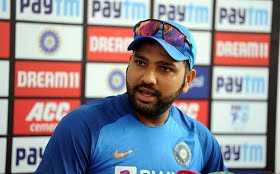 Asked if there was any pressure on bowlers following the loss in the first T20I, Rohit replied, “Pressure is just on the team to perform, as simple as that. Not a particular department. You’ve lost as a team, you’ve not lost as a bowling unit. So the focus will be on the team.

“The batsmen need to get the job done, the bowlers need to come out and take those crucial wickets. That will be the idea. We are not focusing on any individual departments. Because we lost as a team, not as individuals,” Rohit added.

While the batsmen also did not do a great job, with Shikhar Dhawan continuing to struggle (though he was top scorer at Delhi), Rohit was happy with the team’s batting effort. “Our batting looks good. So I don’t think there’s any change we need to make. But we’ll analyze the pitch, and based on that we’ll see what we can do as a team,” the stand-in skipper further said.

Rohit also opined that the pitch at Rajkot would play better than the one at Kotla. “The pitch looks good. Rajkot has always been a good track to bat on and it does offer some assistance to the bowlers also. It will be a good pitch. I’m pretty sure it will be better than what you saw in Delhi,” he went on to say.

The Indian skipper also admitted that he would like his team to learn from the mistakes committed in Delhi. “We were short in a lot of departments. It is important to focus on the mistakes we made and make sure those mistakes are not repeated again,” Rohit candidly added.

Bangladesh registered their maiden T20I win over India in the first match at Delhi, clinching the game by seven wickets. The threat of cyclones could hamper India’s chances of squaring the series at Rajkot.