Both RCB and CSK have hit form after a slow start to the tournament. While RCB has registered three back-to-back wins after a few defeats, CSK will be riding high on confidence following victories over Pune Warriors India and Rajsathan Royals in their last two matches.

But Wednesday’s match at the M Chinnaswmay Stadium occupies special significance for RCB as they will be eyeing revenge following their lost to CSK in Chennai earlier this month. 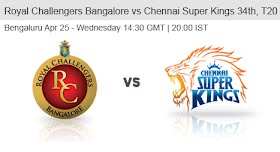 And the hosts, who would be desperate after the last-over loss to CSK in the away match, have the ammunition to dismantle the visitors’ fort at home conditions.