The third day of the second Test at Kingston, Jamaica was marred by rain, but not before India played themselves into a position from where they cannot lose the Test. Ajinkya Rahane, who has been the most consistent batsman for India over the last couple of seasons,

The third day of the second Test at Kingston, Jamaica was marred by rain, but not before India played themselves into a position from where they cannot lose the Test. Ajinkya Rahane, who has been the most consistent batsman for India over the last couple of seasons, especially away from home, stood up once again to register yet another hundred, and take his team to a big total of 500. Rahane batted for 237 balls for his unbeaten 108, an innings during which he hit 13 fours and three sixes, as India declared with a massive lead of 304 runs.

While India have been completely dominant in the Test so far, which has been the case throughout the series, they were unlucky that rain played spoilsport on the third day, which prevented the Indian bowlers from having a go at the West Indies batsmen. It was a really lucky respite for the hosts for their batters would have been mentally drained out after the amount of time they spent in the field, and would not have been raring to have a bat. Things could be a bit different on day four, as it would be a fresh beginning in a sense. With more rain forecast during the Test, it remains to be seen whether West Indies have a lucky escape.

If India indeed manage to have a go at the West Indies batsmen on day four and five, they must ensure that they run through the Windies batting as soon as possible, especially keeping the weather in mind. Of course, natural factor is something beyond their control, but from their end, they must make sure that they do not let any opportunity go begging. It goes without saying that Ravichandran Ashwin would be the key from here as far as India's bowling is concerned. He goes into the second innings with five-fours in his two previous bowling appearances. So, his confidence will undoubtedly be on a real high.

Even as Ashwin will be India's go to man, the off-spinner would be looking for support from fellow slow bowler Amit Mishra. While the leggie has done reasonably well in the series thus far, he doesn't have a lot of wickets to show. It will only help India's cause if Mishra can also strike more frequently so that India can apply pressure from both ends. In the pace department, Ishant Sharma impressed by getting early wickets on the opening day. But, inconsistency remains his bane even though he is the most experienced of all pacers. Mohammed Shami is also slowly getting into his groove. Umesh Yadav, on the other hand, needs more confidence from his captain. 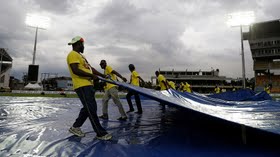 If weather doesn't save them, West Indies are presently in one big hole. A victory is out of question, and even a draw seems like a far fetched dream. But, if the likes of Kraigg Braithwaite, Darren Bravo and Marlon Samuels hang in there and hope from some help from the almighty, you never know what might happen. Teams have got out of jail from such situations in the past. Even if they are not able to save the game, it is important that the batsmen show some fight, which has been completely missing in the series so far. If they manage to achieve that, they will be taking something out of the game.