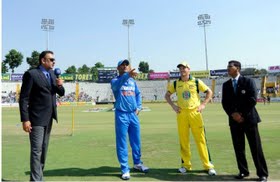 Pitch report: The cricketing gods seem to have had enough of batsmen ravaging helpless bowlers, and have called up a friend. The weather gods have swooped in, washed out the Ranchi ODI - 312 in 54.1 overs before their intervention - and now pose an even bigger threat to the game in Cuttack. The organisers already sound resigned. An Odisha Cricket Association release said: "We deeply regret to mention that the sunny weather that we have been expecting has failed to come true. The ground is completely water-logged and the chances of its drying up are extremely remote."

Stats and trivia The last - and the only - time India and Australia decided to play in Cuttack, rain joined in, and the captains couldn't even come out for the toss.