Schedule for England’s tour of India announced; four Tests, three ODIs and five T20Is to be played at three venues

The itinerary for England’s upcoming tour of India has been announced. England will tour India for a full series with four Tests, three ODIs and five T20Is to be held in February-March 2021.

Owing to the COVID-19 pandemic, the tour has been restricted to three venues -- Chennai, Ahmedabad and Pune. Chennai will host the first two Tests starting from February 5 and 13. Ahmedabad will host the third and fourth Test as well as all the five T20Is. 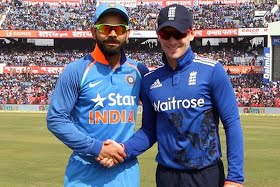 The England tour will be the first international series in India post the outbreak of COVID-19 pandemic. India are also scheduled to visit England in August-September 2021 for five Tests. The five Tests, starting from August 4, will take place at Trent Bridge, Lord's, Headingley, the Oval, and Old Trafford.

As of now, India are preparing for the four-Test series in Adelaide, which will begin with the Day-Night encounter from December 17.

India and Australia shared the spoils in the limited-overs contests with Australia clinching the ODIs and India the T20Is.