Toss :India won the toss and elected to fieldfirst 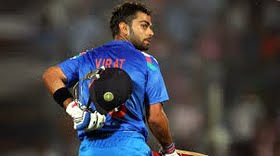 Pitch report : The No. 1 ranking is off the table - Australia needed to win 6-1 or better to usurp India - but India need to win this one to avoid yet another home series loss against Australia. This is their sixth proper home series against Australia, and they have won only once, back in 1986-87. For Australia, once a happy hunting ground, Nagpur has only brought misery since moving to the new stadium in Jamtha. They have played this ground's debut Test and ODI, and have lost both. In the Test, Ricky Ponting chose to avoid an over-rate ban as opposed to pushing for a series-levelling win; and in the ODI, MS Dhoni brutalised them 354 for 7. Except that nowadays, you can't be sure of a win even after scoring 354. Form guide

Indian batsmen have scored three centuries in this series to Australia's zero.

In the last 11 years, only Pakistan and Australia have been able to beat India in an ODI series in India.
George Bailey holds the second-best batting average for Australia. His 53.03 is second only to Michael Bevan's 53.58
Teams: