As India and Australia get set to battle at Mohali, we look back at India’s impressive record at the PCA Stadium in Mohali. Starting with the first Test in 1994, India have played 10 games at the venue, out of which they have won four and lost only one while drawing five others.

As India and Australia get set to battle at Mohali, we look back at India’s impressive record at the PCA Stadium in Mohali. Starting with the first Test in 1994, India have played 10 games at the venue, out of which they have won four and lost only one while drawing five others. India’s only loss at the stadium came in their very first Test played over here, against the West Indies in December 1994. This was the Test in which Courtney Walsh hit Manoj Prabhakar on the nose early in the second innings, following which India collapsed to a massive defeat. Putting the bad memory aside, here’s a recap of India’s four Test victories at the venue, all of which have come post 2000.

India won the toss and chose to field. Thanks to Harbhajan Singh’s brilliant bowling spell, England were cleaned up for 238 in the first innings. Singh picked up 5 for 51 as the Englishmen collapsed after Marcus Trescothick andNasir Hussain registered half-centuries. India responded with 469 courtesy Deep Dasgupta’s 100 and 80s from Rahul Dravid and Sachin Tendulkar. It was Anil Kumble’s turn to shine in the second innings. His six-wicket haul reduced England to 235, leaving India with only five runs to chase. Kumble was declared man of the match for his game-turning spell. 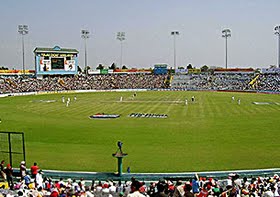 This time, England won the toss and decided to bat first. Kumble was in his elements again, picking up five wickets as the visitors were reduced to 300. Munaf Patel and Irfan Pathan chipped in with three and two wickets respectively. Andrew Flintoff, Kevin Pietersen and Geraint Jones scored half-centuries for England, but none of them carried on. India managed 338 in reply, Rahul Dravid top-scoring with 95 and Pathan chipping in with a half-century. Kumble and Patel picked up four wickets each in England’s second innings as the batting side crumbled to 181. India chased down 144 with nine wickets in hand, Kumble again being the player of the match.

The hosts won the toss and batted first. India put up a very good show with Sourav Ganguly making 102, MS Dhoni 92, Sachin Tendulkar 88 and Gautam Gambhir 67. India gathered 469 following which they bowled out Australia for 268. Rookie spinner Amit Mishra grabbed five wickets. Shane Watson top-scored for the Aussies with 78 while Mike Hussey made 54. India batted very well in the second innings as well –Gambhir made a hundred, Sehwag contributed 90 and Dhoni made an unbeaten half-century as India declared at 314 for 3. Chasing 416, Australia collapsed to 195, Harbhajan and Zaheer Khan claiming three scalps each. Dhoni was declared the man of the match.

The most recent encounter at Mohali was a humdinger. Batting first, Australia made 428 with Watson scoring an impressive hundred. Zaheer picked up five wickets for India. The hosts themselves replied with 405 –Tendulkar making 98, Raina 86 and Dravid 77. India bowled exceedingly well in the second innings to finish off Australia for 192. Zaheer and Ishant Sharma claimed three wickets each. Australia themselves came back incredibly, reducing India to 124 for 8. However, a cool VVS Laxman, with great help from tailenders, saw the hosts home. Zaheer was the player of the game for his excellent bowling effort in both innings.